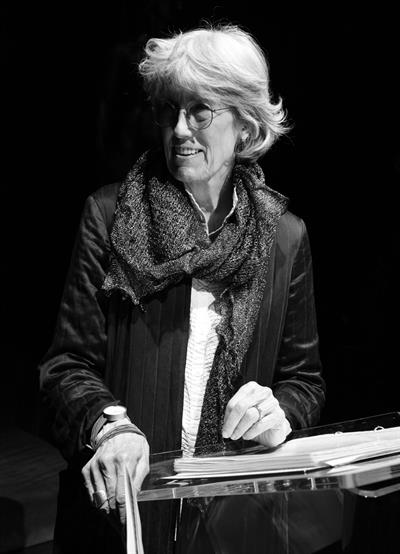 Eileen Hogan is a painter, who has shown extensively in museums and private galleries in the UK and America. Her recent retrospective at the Yale Center for British Art (May - August 2019) in New Haven, USA, focused particularly on two dominant themes - enclosed gardens and portraiture. Through painterly analysis, Hogan has explored the importance of green spaces in an urban environment. She investigates an expanded notion of what gardens are, their dynamics, the way that they are used, the patterns of life they generate and their impact on health.

During Hogan's residency at London’s Garden Museum (2015 - 2017) she created a ‘virtual museum’ by inviting 90 people to select a green space in London that mattered to them and describing why. This shed light on the position of the artist-in-residence and the congruencies between artist, concept and patron institutions. The Garden Museum is itself a museum-without-residence, in the sense that its subject doesn’t reside in the museum. It’s a conceptual museum. Hogan reflected this by creating a virtual garden museum and she used the selection of gardens to develop a series of paintings concerned with the notions of control and randomness, routines (her own and others), exclusivity and inclusion.

Hogan has used painting to sustain a visual reflection on biography, self-image, trace and formality in portraiture. Collaborating with the oral history charity, National Life Stories, at the British Library, she worked with an oral historian to establish the impact that a detailed narration of a life story might have on a sitter’s presence. She expanded on this, in a student context, when she was one of five artists invited by Tate Research to each construct a filmed life class at Tate Modern (one thread of the Leverhulme-funded Tate research project: Art School Educated). Hogan’s film explored the way that stories underlie how we see the world and it was shown in the Tate Britain Display - Reception, Rupture and Return: The Model and the Life Room in 2015.
Through establishing a research group About Face in 2014, Hogan examined what happens when different disciplines and perspectives are brought to bear on contemporary portraiture and why, when portraiture plays an important role in the development of narrative traditions, it is mostly absent in art school curricula in the UK. Symposia were held between 2015 and 2018 at the UAL, Hauser & Wirth, Bath Academy of Art and the National Portrait Gallery. Issues such as identity, vulnerability, patronage and ownership, together with the concern’s evidenced in Hogan’s portraiture, were further explored through commissioned essays and films. As part of a conversation about the connections between historic and contemporary portraiture, Hogan turned to self-portraiture as part of the research, exploring the presence absence of her own body. About Face is jointly led by Hogan and Professor Charlotte Hodes (London College of Fashion).

Hogan’s professorship crosses over the disciplines of theatre and fine art and she is concerned with the way that theatre archives can be animated and have relevance for contemporary practice. Establishing a collaboration with the National Theatre in 2009 Hogan created the annual Jocelyn Herbert lecture, established a number of post-doctoral Fellowships and has organised projects with Camberwell Chelsea Wimbledon BA and MA students, all of which have explored creative ways of responding to theatre and performance archives. The collaboration with the National Theatre is jointly directed by Professors Jane Collins and Eileen Hogan.

Fine art
Performance and design for theatre and screen