On Sunday 10 June, a group of LCF students and staff marched for Processions London. Together with Historic England and artist Lucy Orta, we worked with inmates at HMP Downview women’s prison to produce a number of banners as part of Artichoke’s nationwide mass-participation art project. MA Fashion Futures student Amy Foster-Taylor wrote a reflective journal on her experience working on the project. 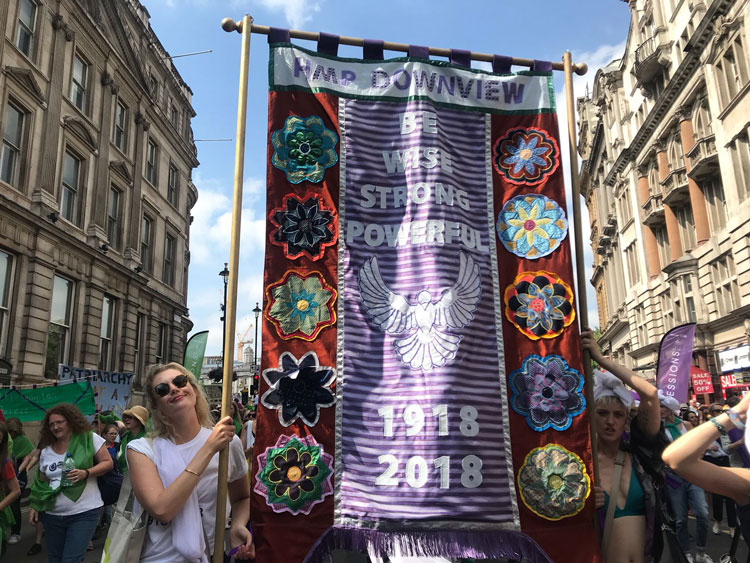 My third and final visit to HMP Downview, it felt bitter sweet. I loved working there and getting to know the women, and it felt sad that just as we are getting more comfortable with each other, my involvement in this part of the project has ended. Yet I was also really looking forward to the Procession itself, where we would represent the women and also be joined by those that had since left Downview.

I joined the Processions volunteering team with no preconceptions. It sounded like an amazing project, but other than meaningful interactions with the women, there was nothing I particularly wanted to gain from the experience. Also, coming from a business background, I initially didn’t see the link between this project and my practice. However, as the Processions project has developed, so has my personal work and MA project ideas. Central to this, is the idea of reinstating human values. Ordinarily I would apply this notion to a business setting, but my work with Lucy, Jo & the Processions team, has affirmed that recognising human values within all parts of society is really needed. The majority of my friends, like the majority of society, work within roles that value profitability above everything else and neglect people and the planet. Broadly speaking, I am interested in how we can reinstate the essence of humanity within our society.

Before attending prison for the first time, I was really shocked to learn that only 5% of prisoners in the UK are women, and over half of these women have suffered domestic violence. Not only is this completely heartbreaking, but it really shows how the system can fail those who are most vulnerable. Yet the Processions project also highlighted something else – how a seemingly simple act could have an impact on multiple women’s lives.

Part of my interests lie within systems thinking and studying where it is best to intervene within a problematic system. The Making for Change workshop to me, was an incredible place to alter the course for women, who are often within a self-perpetuating cycle. Many of the women I spoke to had achieved qualifications through it, and were looking forward to progressing a career in these fields afterwards. One woman was looking forward to assisting her daughter, who wanted to study fashion design. And most impactful for me, was a young woman who had ignited an entrepreneurial spirit and a desire to open a vintage tea room, selling flowers and up-cycled vintage clothing that she would create using her newly found sewing skills. She wanted to go back to school and explore new paths to learn, such as working with other organisations that aid vulnerable women – be it, an east London bakery, or a drama group. Hearing her talk so passionately, it felt like such an achievable goal, and one that could also completely transform her life. She is confident, determined and empowered.

Not only does this carefully considered and effective approach create change in the long-run, but short-term, it provided a really positive and inspiring space. I found that despite being within a prison, the workshop was an area where everyone felt equal. We connected as women to women, rather than volunteer and prisoner. In fact, the use of language really affirmed that. Writing the word ‘prisoner’ there, is the first time I have used that word since being part of the Processions group, and it feels quite uncomfortable for me. In the workshop all women felt comfortable and it allowed for really great conversations in an enjoyable and upbeat space. It wasn’t about us and them. The nature of the Processions project is around women’s right to vote. No matter our background, we were just women who knew what it felt like to be women, and we could instantly connect on the most basic human level. Inspired by each other, and drawn together by a desire to create.

It’s worthwhile noting that it wasn’t all women, as some of the volunteers were men. This to me was so important. Movements shouldn’t be exclusionary; everybody should be part of the conversation, and everybody was welcome to try their hand at new experiences. It reaffirmed that we are all just human, wanting to make the world a little more positive. If the women feel empowered to create an alternate path for themselves with the skills they have learnt and the conversations they have had, then that is incredible. But personally, I feel so inspired and fulfilled knowing that on a Friday, after coming in to the Workshop feeling exhausted or not bothered, the women always left feeling positive and empowered. It highlights how using creativity is not just a force for good, but a force that unlocks a world of opportunity. No matter the scale or approach, our actions really do make a difference.

Speaking of ‘scale’, the march was yesterday! I felt like we had been in a little bubble at Downview, and I actually forgot the reason for this project. As noted above, I had already felt so happy participating in the workshop, without considering that the work we were doing had a purpose. The Procession was incredible. It was such a happy day where women came together from all walks of life, to celebrate one another. We were all on a complete high! Of course, I felt really sad that the women from Downview missed out on such an amazing experience, but having got to know them, it was an absolute honour to represent them and their beautiful work. One of our banners had the words “A New Start” embroidered, which was truly the case for the amazing women that had since left Downview, and marched with us during the Procession. It truly was a day of celebrating women and change in all forms – from the women 100 years ago who fought for the right to vote, to the women that shape our societies today.

Thank you to Jo, Lucy and the team for such an incredible experience, and not only one that I will never forget, but one that will continue to inspire me throughout my life.