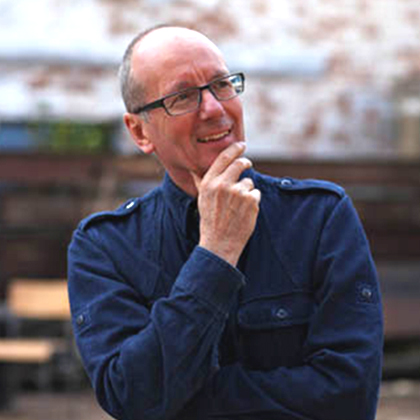 Professor David Toop is Chair of Audio Culture and Improvisation at London College of Communication and Associate Lecturer on BA (Hons) Sound Arts and Design. He has worked in many fields of music, sound arts, curating and writing.

His roles at LCC and within UAL include research, PhD and MPhil supervision, lectures on curating sound, an annual course on the practice and analysis of improvisation, membership of CRiSAP and activities as a University Chair.

David is the director of Unknown Devices, an improvising group of LCC BA and postgraduate students that has performed at Tate Modern, Tate Britain, The Barbican and Southbank.

He has written five books on sound theory and history; Rap Attack, Ocean of Sound, Exotica, Haunted Weather and Sinister Resonance, and is currently working on 'Into the Maelstrom', a two-volume book on free improvisation.

As a composer and musician he has released many records, including nine solo albums, the first released on Brian Eno’s Obscure label in 1975, the most recent released on David Sylvian’s samadhisound in 2007 and on SubRosa in 2014. Exhibitions David has curated include Sonic Boom at the Hayward Gallery, Radical Fashion at the V&A, Playing John Cage at the Arnolfini in Bristol and Blow Up at Flat Time House in London.

He also writes art and music criticism for catalogues and books (most recently Fondazione Prada’s Art Or Sound and the Whitechapel Gallery’s On&By Christian Marclay), journals and magazines such as The Wire and Pitchfork.

In collaboration with Rie Nakajima, he curates a performance event for invited artists called Sculpture and is currently external examiner for Oxford Brookes University School of Arts MA courses.