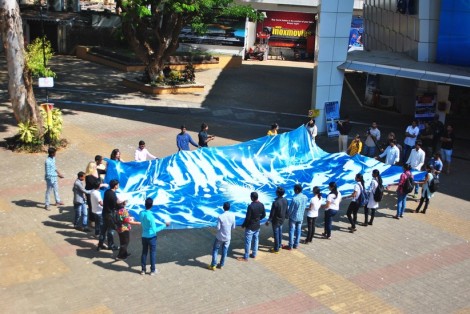 Central Saint Martins MA Art and Science graduates Melanie King and Jaden Hastings recently broke the record for the world’s largest cyanotype at the Story of Light festival in Goa.

In January 2015, the pair travelled to India to take up a residency at the old British Defence Colony in Porvorim. With the help of students from the local college, they produced a huge prussian-blue ‘light print’ the size of several bedsheets.

To create the cyanotype, Melanie and Jaden coated a bolt of cloth with potassium ferricyanide and ferric ammonium citrate in a temporary darkroom. When it had dried for four hours, they ran the cloth outside for the student volunteers to lie on.

After ten sweltering minutes holding their poses in the midday sun, the volunteers leapt to their feet. Everyone gathered the cyanotype into a bin of water and washed off the remaining chemicals. Where the paper had been exposed to the sunlight, an insoluble blue dye had stained the cloth.

People and the universe

The artwork drew attention to how connected people are to the universe. Melanie says: “We often feel that we are separated from space, but actually we have a very strong connection with it.

“This is an attempt to demonstrate how the sun’s energy affects materials on earth and highlight our connection with the broader universe as a source for creativity and inspiration.”

Melanie plans to break the cyanotype record again on 2 May 2015, at the Wellcome Collection’s On Light weekend even series. She is also curating and exhibiting at UAL Showroom’s Aether event in April and convening a photography symposium in May.