Inspired by Converse’s colourful Wall of Clash installation, teams of art student finalists were invited to compete in colour, and paint London for the #SneakersClash battles.

Taking over one of three sets of walls across London, was Wimbledon College of Arts, Second year, BA Fine Art: Painting students Jessica Bryant and Beth Field. They were given free reign to paint close to Archway tube station and won their battle. 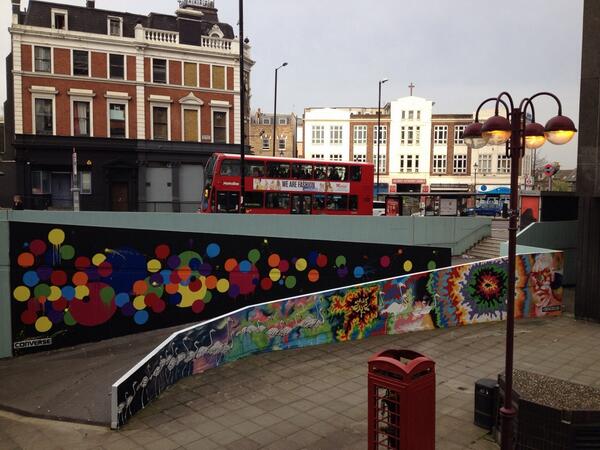 The ‘walls of clash‘ were judged for their originality, execution and use of colour. Furthermore, just to keep standards high they were also marked on professional logistics including team work, communication and planning.

The winning design from the WCA students Jessica Bryant and Beth Field involved a minimal design of colour dots with a close attention to complementary colours and an invitation to interact. The phosphorescent thermochromatic dots adapt to their surroundings, with colours changing to the touch and phosphorescence glowing as night draws in. 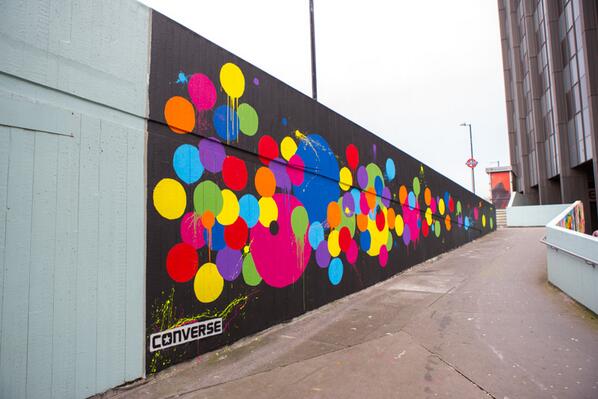 We asked Jessica Bryant about the teams Wall of Clash experience, and here’s what she had to say:

‘The weekend was fantastic, it was really bright and sunny and converse provided us with all the materials and equipment to make sure we had a fun and reasonably simple weekend! We came up with a design that would allow passers by to interact with the wall by using thermochromic paint… our idea was to make a really bright simple design that may brighten up the local passers by’s day, and also allow some interaction to diminish the passivity and segregation that can occur with some public/street art and its surrounding residents.’