What it means to be ‘female’ in…

….Peru, Italy, Pakistan, China and Iran. They might come from very different places – but each face a similar battle. Here, these UAL women share the very personal stories behind their art.

ANDREA: “I shared my most private thoughts.” 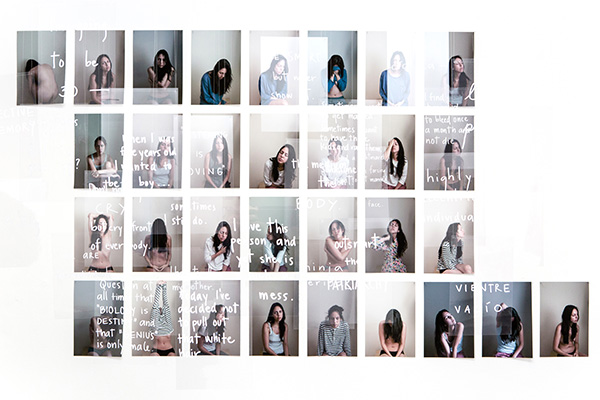 “I love this person and yet she is such a mess.”
“I can’t be nice all the time.”
“When I was five years old I wanted to be a boy.”
“Be smart but never show it”
“Outsmart the patriarchy”
“63.3kg”
“Today I’ve decided not to pull out that white hair.”
“Question at all times that biology is destiny and that “genius” is only male.”
“I find it so weird to bleed once a month and not die.”
“I must call my mother”
“I’m going to be 30”

For most girls, the idea of publicly revealing their weight or the number of stray grey hairs is enough to render them speechless. But photographer, Andrea Vargas chose to turn this fear into a (very) public visual diary – layering secret thoughts over ‘honest portraits’. Here she shows what she, and perhaps most women of her generation might be going through.

“Girls are always coming up to me and saying: ‘You’re in my head!’ It shows how similar we all actually are – how we are driven by the same fears and vulnerabilities about our body and our choices. By revealing each thought – I shed a layer of anxiety and fear.

I deliberately took 31 photographs of myself. This was to challenge the idea that women need to fit into a 28-day cycle as dictated by things like the Pill. Again, women are forced into this tiny box. Instead, I wanted to dismantle that notion and show how we should define ourselves and also to show how my turning 30 and getting older is something to be celebrated.

I’m from Peru and at my age, my mother was already married and had children. And here I am, on the cusp of turning 30, and I’m childless and unmarried. My mother already knows I’m not following a conventional path (or whatever she might think conventional is).

Perú, itself, is far away from equality in any sense, let alone gender equality. There is a lot of pressure for women to be this perfect human being. She must know what she wants, have a Master’s degree, make money, stand up for herself, get married, have children, raises them right, be a good wife, and with whatever strength she has left, tackle all her own personal issues. It’s exhausting.

I want my work to show that girls can and define themselves in whichever way they wish. You can choose for yourself and be whoever you want to be.” In La Luna, Vargas combines photography and text, exploring ideas of societal pressure on women in Latin American society. Using her body as the main subject, she has made a series of what she calls ‘honest portraits’, investigating issues of self-acceptance and perception of her own body. Creating a visual diary, in which she includes these self-portraits and her own thoughts poured on the wall, she tries to help the viewer understand what she, and perhaps most women of her generation, might be going through in some determined part of her life.”

LICHENA: “It took my parents 15 years to accept our relationship.” 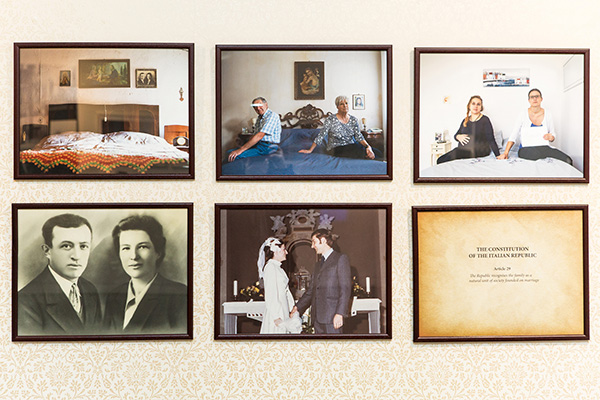 In ‘The invention of the family’, Lichena Bertinato traces the evolution of her family through old family portraits, raising questions about LGBT rights in Italy, where there is not yet any legal recognition of same-sex families.

“This series shows three generations of what ‘family’ looks like in Italy. From my grandparents, to my parents, to me and my pregnant girlfriend, Elisabetta. Three relationships, equal in measures of love, but each recognised so differently.

It took my parents 15 years to accept our relationship. It took Elisabetta’s family 10 years. It hasn’t been easy, but placing my relationship next to my family’s history was a cathartic experience. It was a mix of fear and the need to feel brave for when Elisabetta and I become parents ourselves.

I will teach my child that there is not just one family model but all kinds that share the same values, regardless if there is a single parent, or if parents are two men or two women.

The Church and society expect women in Italy to raise children, take care of the house and keep her husband happy. Society doesn’t help us to fulfil our potential, except from gaining a realization as mothers. I think that mothers in Italy forgot that they are also women. And when women speak up, they are labelled as feminists or subservient.

Here in the UK, we will both be legally recognised as parents of our child. Both of our names will appear on the birth certificate. But once back in Italy, we do not exist: I won’t exist as a partner and even worse, as a parent.

Last summer The European Court of Human Rights ruled that Italy was violating human rights in not recognising any form of civil union or same sex marriage. So while I wait for the law to catch up on my family status, I am inventing one, for which I claim my own rights, The invention of the family.”

SAMIYA: “I felt inferior to my brothers because I was born a girl.” 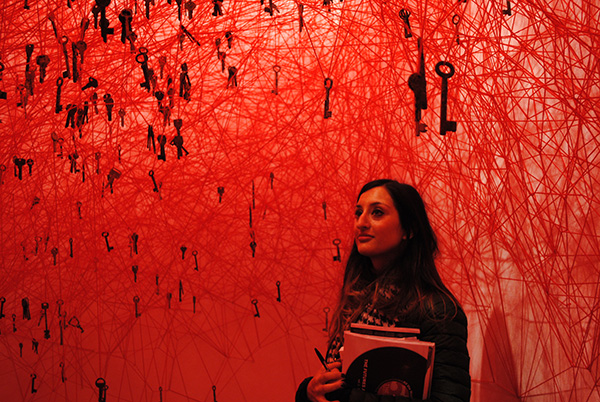 She had endured too much to remain silent. For Samiya Younis, the answer was to pour her frustrations, fears, and ultimately her self-acceptance into her art. Here she opens up about overcoming her past.

“I am one of nine children, born in the UK to Pakistani parents. Growing up, I always felt inferior to my brothers because I was born a girl. It’s different for the girls in the family. My mother was married at 13 and had her first child at 15. Many of my sisters have been forced into marriage.

When we turned 15, my twin sister and I were promised to our first cousins and we were engaged. By 17, we would be their wives. My sister and I were forced to leave home and we’ve been estranged from our family ever since.

Being raised as a Muslim has impacted me severely. All my life I have felt alone, scared and unloved. I have been repressed, controlled and suffered mental, emotional and physical abuse from my parents and elder siblings.

My parents threatened us into believing if we didn’t follow Islam we would go to hell. I was told to befriend only other Muslim females. I had to attend Saturday school and read the Quran every day. If I got any of the words wrong, I would be beaten.

I was made to believe women were second class citizens, only good for obeying, bearing children and being confined to the home. Women are made to wear traditional Pakistani clothes with head-scarfs and when occasionally they are allowed out, they must be chaperoned. Education is not encouraged.

I have struggled with my identity and confidence as long as I can remember. Not knowing where I fit in this has affected me in adult life. I struggle to trust and build relationships. But my work helps me create awareness of these practicing on women’s repression, and how they can affect an individual.

I want my work to highlight the secret repression that is still happening and remains hidden – for all girls everywhere.”

WENDY: “We are expected to get married and bear children. This is ingrained into us from when we are kids.” 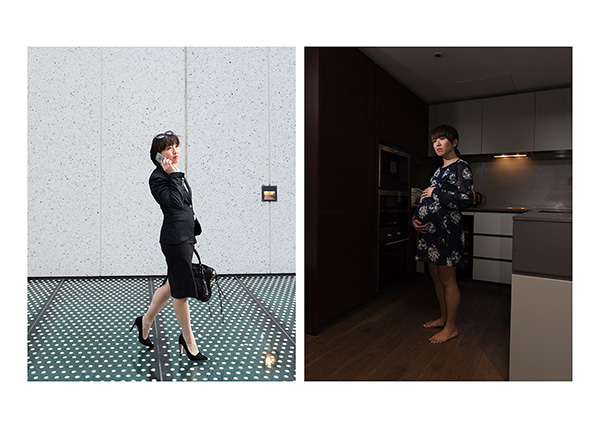 In ‘A Woman’s Fate’ Wendy  Lee-Warne explores gender identity in a traditional Chinese family in Singapore. She records some of the future pathways that were open to her as a child.

“Once a baby is identified as female in Chinese culture, she is expected to fulfil a specific role – to get married, bear children and serve her family. This is ingrained into us from when we are kids. We must act our part.

Instead I took a different path and trained as an architect. But even then, I didn’t belong. It’s unusual for women to be on a construction site – they are out of place.

My mother, who comes from a long line of traditional Chinese families, just wants me to find a good man, get married and have a family. Instead, I quit my stable job to pursue photography. My parents are not happy with me. They see my choice to pursue a ‘physical’ job as a waste of their investment in me.

But I am so much more fulfilled right now. My work is about women to pursue the life they want. Women are capable of being who they want to be. Simone De Beauvoir’s The Second Sex said it for me. ‘One is not born, but rather becomes, a woman.’

We should not conform to conventions just because of expectations but in fact, allow ourselves to grow and become comfortable in our own skin, deciding for ourselves what we want to be, how we want to act and who we want to love.”

SHADI: “By dressing up as and acting out their lives – I became these women.” 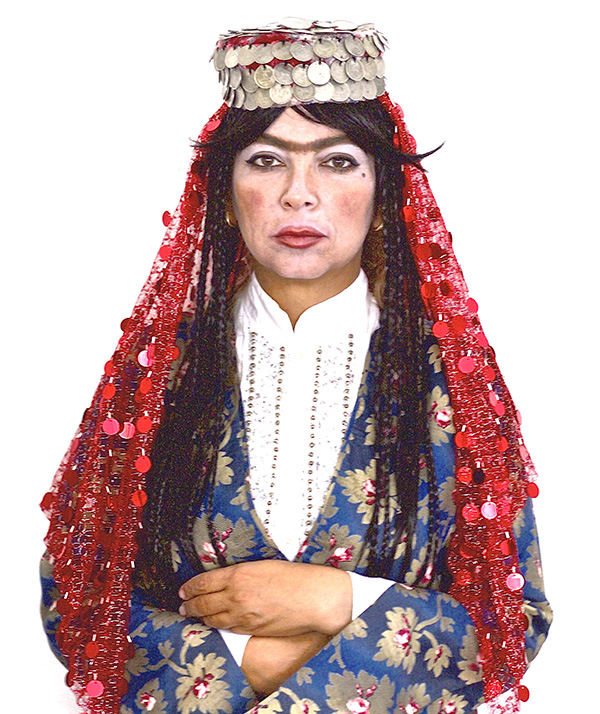 Meet the woman with a thousand faces. From chance meetings with strangers , Shadi Mahsa channelled their beings and immortalised them into her art. Here, she unmasks her inspiration.

“I am an Iranian woman and have lived in exile since 1991. In my journey, I’ve encountered characters that are forever seared into my memory. Real women, from all classes of Iranian society, whose personalities show a fine balance between an imposed subservience and the natural strength of their gender. From time to time, I still think of them and wonder how they are coping with their lives.

By dressing up and acting out their lives – I became them. Whether it’s Farzaneh, or ‘Ferri’, the woman dressed as man, living a homosexual life, to a veiled woman driving a car in the public eye. These are challenging characters, but all their stories deserve to be told.

There are so many burdens placed on women in Iran, from style of dress to their legal rights, spanning divorce, travel and inheritance.

Women in Iran must obey the husband. The man is the leader of the family – it is he who decides. A man can marry up to four wives, and have unlimited short marriages, ‘sigheh’. These rules do not apply to women.

My work is about sharing the truth. To highlight a universal issue regarding women. It is not an issue just in Iran, it is global. In some countries more and some less. The detail is different, but the injustice is everywhere.”