The talk given by Turner Prize-winning artist Jeremy Deller at London College of Communication on Thursday 13 March is now available to watch online.

Jeremy was introduced by UAL Chair, designer and artist Scott King, with whom he has often collaborated. The talk began here at LCC, as Jeremy recalled a course in printing techniques that he took here during the early 1990s, before spanning key moments in an artistic career focused around history, society and pop culture.

The artist spoke about his inspiration in producing 1997′s ‘Acid Brass’, in which a brass band performed acid house tracks in an exploration of folk culture, media hysteria and civil unrest. He described how the success of the work liberated him from “making things”, noting that “the public are much more open-minded than you might think”. 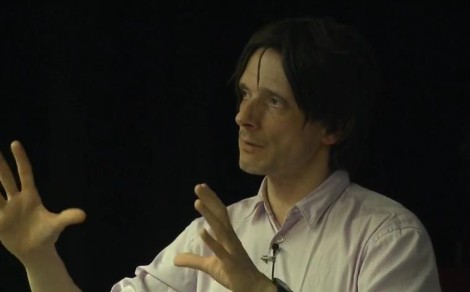 Jeremy went on to talk about his interest in the Miners’ Strike and his recreation of ‘The Battle of Orgreave’ (2001) – “a highly contested moment in British history” – featuring those connected with the original clash alongside members of historical re-enactment societies. He showed the 1973 photograph of flamboyant wrestler Adrian Street and his Welsh miner father which first interested him in Street as a subject.

The talk also covered ‘Folk Archive’ (2000-5), some of Jeremy’s work with prolific banner maker Ed Hall, and his rejected proposal for Trafalgar Square’s fourth plinth – a piece of wreckage from the Iraq conflict which will soon by displayed in the reopened Imperial War Museum.

He closed with a look at the explicitly UK-focused room he curated at the 2013 Venice Biennale, and a project juxtaposing photographs from David Bowie’s fantastical Ziggy Stardust tour with images of real contemporary news events. The evening ended with a Q&A session featuring questions to Jeremy about his career from audience members and Scott King himself.

A huge thank you from LCC to Jeremy and Scott for an insightful, engaging and wide-ranging evening. 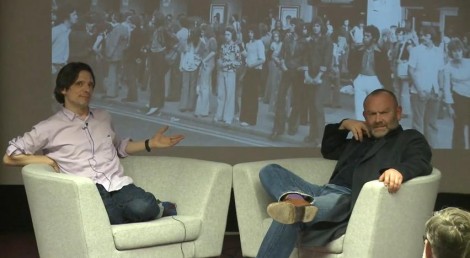