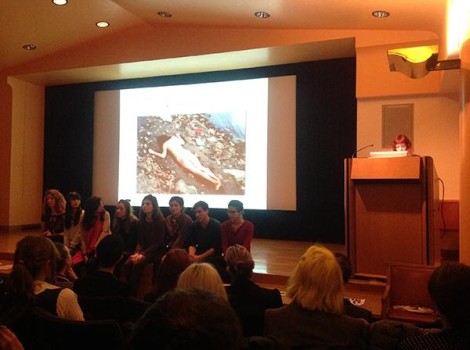 We are very proud of our 2nd year BA Fine art students who recently led a symposium entitled, Territories of Practice at the Tate Britain.  This exciting collaboration gave the students a chance to explore themes and concerns that shape contemporary fine art practice.  Through discussion and analysis of their own evolving art practices the students established a set of 12 territories.  Working alongside members of staff at Tate, each territory group explored the shared themes, ideas and concerns that arise in their practices and that of established contemporary artists.  Each group made a short presentation based on their research with the view to initiating discussion about the current state and future of art.  Joey Phinn a 2nd year fine art student who participated in the symposium has kindly written a review of the day below.

‘As the first year to embark on the Territory of Practice presentation at Tate Britain, there was a lot of uncertainty: what does a presentation really entail, and who is it for? Some groups, like the Everyday & Popular Culture territory, reenacted a witty office-meeting performance of their months spent in discussion, accompanied with pie charts and a whimsical melody. Still others performed exquisite corpse readings (Psychoanalytic Thinking in Practice), held actual discussions on stage (Object and Display) and gave out handouts (Politically Engaged Practices).

My own territory, Personalised Universes, involved much less conflict in deciding what to present: a video compiled of short 40-second ‘universes’ that each of us would create. We had no idea what anyone else in the group was making; yet the final film turned out eerily cohesive and the psychedelic sound of some of the clips sounded fantastic in the Clore Auditorium.

Overall, the presentation was an enriching experience because it gave us insight into the overall themes and ideas we were dealing with as a collective Stage 2 class – something difficult to put into frame or words even as a student in our year.   I got some prime inspiration for video/performance work from some of the other groups and the Tate presentations gave us keen insight into Tate Britain’s educational operations.

As second years, we’re in a bit of a sandwich: wedged between the experimental, bright-eyed first years and the ancient Stage 3, already one foot in the world I hear exists after graduation. We can feel lost, with a developing practice that we’re not sure is going in the right direction. That’s why being part of a territory of practice is so useful, and why, ultimately, this year’s TOP presentation at the Tate was a genuine success.’