Seven Designs of the Year Nominations for Central Saint Martins 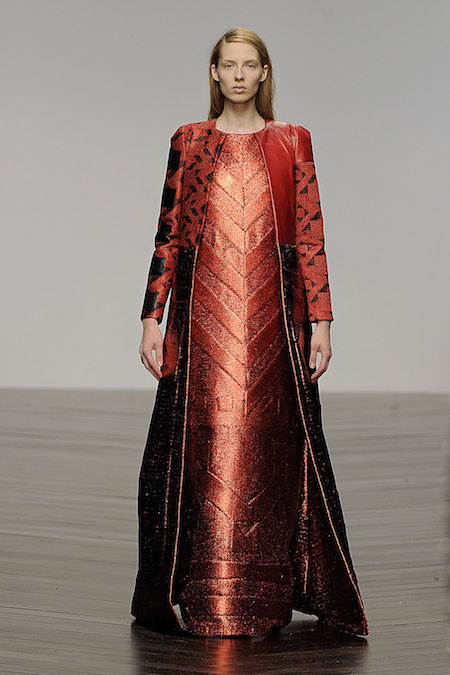 Staff and alumni from Central Saint Martins have racked up nominations across the fashion, graphics, product and digital categories.

MA Fashion 2013 graduate Sadie Williams has been nominated for her graduation collection Totemic. Her collection of dresses are made of stiff 3D embossed textiles, inspired by the graphic masculine print arrangement found in biker clothing, helmets and satin racing vests. Last year, MA fashion alumnus Craig Green also made the awards shortlist with his graduate collection.

BA Fashion alumnus Stephen Jones has been nominated for the A magazine he curated. He dedicated his issue to Anna Piaggi and the art of illustration, and featured work from BA Womenswear Pathway Leader Howard Tangye. It also included CSM’s Will Broome’s illustration of Sabine Bryntesson’s MA Fashion collection.

Sidekick Creatives, which has been put forward in the digital category, is a collective set up to support individuals and companies with their crowdfunding campaigns. Two of Sidekick Creatives founders are CSM graduates: Anisha Peplinski (MA Communication Design) and Oscar Lhermitte, (BA Product Design). Speaking about the nomination, they said:

“We’re incredibly proud to have been nominated alongside such brilliant peers. As a collective of seven people who only started out in 2013, it’s a great start!”

The Pet Lamp, also nominated, was designed by fellow product design graduate Alvaro Catalan De Ocon. Hand woven from strips of discarded plastic bottles, each lamp is a durable object which combines one of the planet’s most industrial products with one of the most down-to-earth techniques.

Inigo Minns, who teaches on MA Narrative Environments, has been put forward for Risk Centre. Together with Onkar Kular, he transformed the Arkitekturmuseet, Stockholm into a risk assessment facility and educational performance space.

Also a Graphic Design alumnus, David Lane was nominated for his food, arts and culture journal The Gourmand. Priding itself on high production values, the journal combines exquisite printing with a variety of materials.