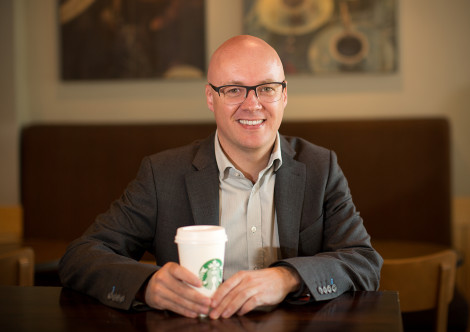 Pleasingly approachable, Simon delivered a warm welcome to all – fans and non-fans of Starbucks – before setting the agenda for the evening: his past work history, life at Starbucks UK, the differences between in-house PR and agency PR, and crisis communication. Also a member of the board, Simon is a busy man with a reputation to uphold, for we learnt that Starbucks, a global company with 750 stores, has 60,000 Twitter followers and 12 million Facebook likes.

Having acquired a Masters in politics, Simon began with a string of temporary jobs. Early in his career, he admitted to making a costly mistake – one from which he quickly learnt. Unbeknown to him, a journalist posing as a client phoned him up to ask a myriad of questions – which Simon, being the conscientious employee, duly answered. In doing so he accidentally disclosed confidential company information to the incognito journalist, who exposed this to the public the following day. Simon underlined the basic need to know at all times who exactly you are talking to, and on what basis.

Before Starbucks, Simon acquired his experience in a variety of ways – working on political campaigns, for Eurostar agency Fishburn Hedges, Virgin and various start-up companies. Regarding his penchant for working in an agency when doing PR, he explained:

“In a big agency it’s very creative, long hours, and hard work, but it frees your mind”.

For Simon, the exciting thing about working for Starbucks is the massive challenge it presents, while the fantastic people are a huge factor in his overall job satisfaction. He is proud of Starbucks, and it showed. He spoke of every employee being entitled to free healthcare for themselves and their families, of all employees having shares, of Starbucks helping war veterans and employing 8,000 people in a fair trade agreement. 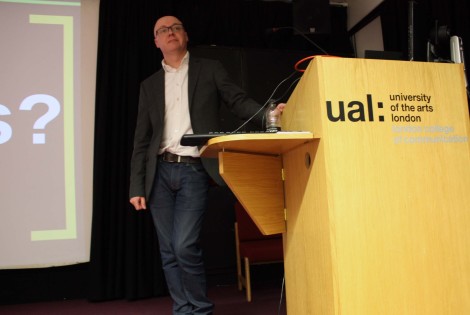 It was obvious that Simon is an advocate for storytelling. PR should have a focus around stories, he said – stories which are valuable, real and meaningful. He recommended asking yourself: does your story ‘pop’? He believes that the drivers of successful communication are able to disrupt, delight and innovate.

Twitter, from his perspective, is now a valid measure of success. “Looking at what people engage with has been really instructive in how we use social media to generate cut-through”.

Whilst working at Fishburn Hedges for Eurostar, Simon was involved in what he refers to as one of the first big social media firestorms – 7,000 tweets were the result of one very large engineering problem. During the winter, some trains became halted in the purpose-built underground tunnels – the worst affected enduring an 18-hour ordeal. The tweeting was relentless, and the Eurostar team worked around the clock to answer every single person, also engaging in a twitter Q&A session.

Simon stressed the need to get ahead to mitigate mistakes. That means allocating your resources strategically: to pack a punch, they must be focused. In a crisis such as this, he found that in-house PR best dealt with internal communications, and eliciting the help of an external agency helped communicate externally. The quick responses given helped people feel calm. What was the most important piece of wisdom Simon gained? “To show people you live up to your values”. It was evident that he carried this belief into his current position with Starbucks UK.

Simon was careful to provide some sage advice to those of us seeking a career in PR – that it is not easy to see your company in the way the world sees it. We were cautioned against being jaded by internal organisational messages and warned not to believe them as always portraying the complete truth. It is just as important to sometimes step back before you look – something which is hard to do and a skill Simon admitted to being in the process of cultivating.

The self-confessed lover of good stories is a good storyteller himself – reflected by the response which followed his talk: people asking questions and wanting to know more. We were then left to ponder his concluding line: