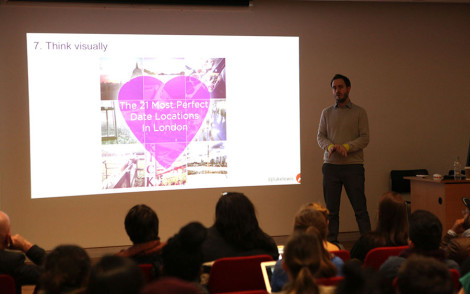 On Tuesday 4 February Luke Lewis – Buzzfeed’s UK editor – came to London College of Communication to deliver a guest lecture. His talk was on the subject of “Journalism the Buzzfeed way”, or how to use social media to drive traffic and at the same time deliver high-quality investigative reporting. BA (Hons) Journalism student Desislava Todorova reports.

The distinctive journalistic style that Buzzfeed has introduced thanks to its well-known lists and quizzes has resulted in astonishing growth to around 130 million monthly users around the world since its launch in 2006.

Luke joined the Buzzfeed team in 2012. Back then, he was simply a fan, so “out of the blue”, he said, he sent a mocked up version of what a UK Buzzfeed front page would look like to the US editor. A few months later Buzzfeed UK was born. 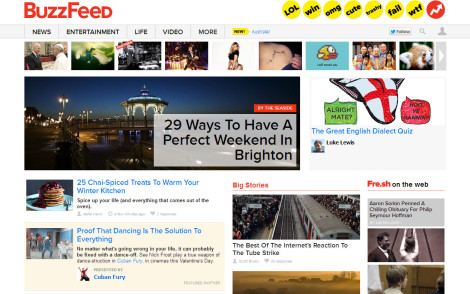 Buzzfeed uses social media like Twitter and Facebook to establish connections with its readers. According to Luke, future innovations for Buzzfeed should be kept “fun” and simple, despite the seriousness with which these topics are sometimes treated.

The forum itself was based on Luke’s tips for building audience and maintaining high traffic. The main idea behind this is to keep up with what is viral and support it with visual material, mostly pictures. It should be made sharable and mobile-friendly, quirky, and popular at the moment of publishing, which usually requires “digging”. The use of data here is of extreme importance and a catchy headline will always gain a greater audience. Reporting on news online, Luke told the students, shares the same rules as traditional journalism.

Other interesting facts about Buzzfeed UK revealed during the talk were that the audience contains a slightly higher number of female users (60%), and the demographic of frequent users falls between the ages of 18 and 34. Compared to the US website, where they have a sports section, Buzzfeed UK doesn’t usually feature sports in its lists and quizzes.

All in all, Luke said that going beyond the general idea of pictures and topics, combined with being adaptable and entertaining, maximises the impact on people who tend to share this kind of fun list. It also builds up larger audiences and looks eccentric and different.

The talk was attended by more than 100 students from different courses and staff from the university. It was very well received, judging by the amount of interest and applause it provoked. After the 30-minute presentation, the audience was given time for a Q&A session. Luke was very generous with his explanations and stayed afterwards to have a personal chat with everyone who expressed an interest. 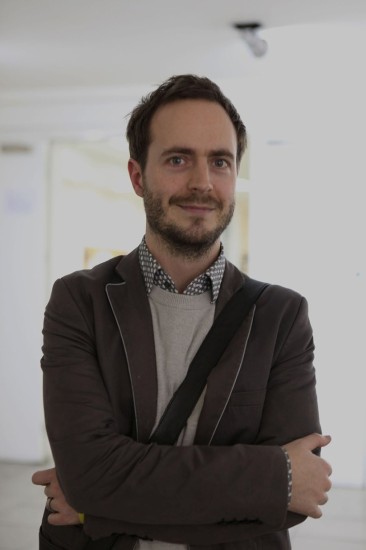