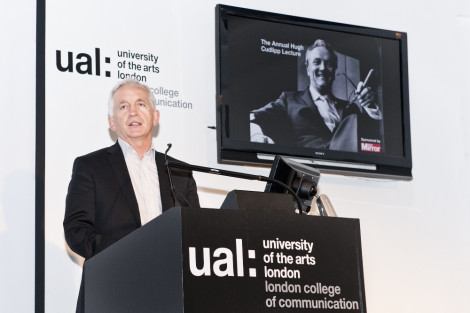 The journalist once dubbed as the “little troll” by cycling cheat Lance Armstrong has criticised the UK libel laws, saying they protect the rich and powerful, in a speech at London College of Communication.

Walsh took the audience back to where it all began in 1993 with Armstrong’s first Tour de France, and showed various video clips of Armstrong’s rise and fall after years claiming to the media that he was clean.

The talk highlighted how tenaciously Walsh fought to prove the cyclist’s guilt and in turn how Armstrong successfully convinced the public of his innocence for more than a decade, often through the sports press, who he said were “not sceptical enough”.

Armstrong survived testicular cancer before going on to win seven Tours, but finally admitted in January 2013 that he had taken performance enhancing drugs throughout his cycling career and was stripped of all seven titles.

To read the rest of this article, visit Arts London News, the University of the Arts London newspaper produced, managed and edited by Journalism students at London College of Communication.

Watch the lecture in full: