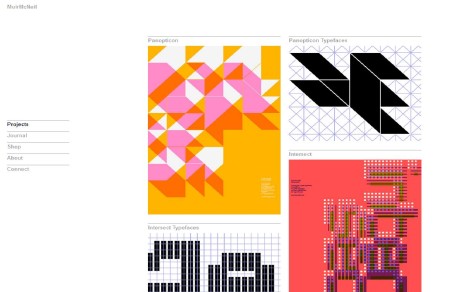 MuirMcNeil, founded in 2010 by design practitioners and London College of Communication colleagues Paul McNeil and Hamish Muir, are pleased to announce the release of four new parametric typeface systems: Panopticon, Intersect, Nine and Interact. These are accompanied by the simultaneous publication of a set of four large format day-glo posters, one for each typeface.

The four new projects continue to explore the design approaches established in MuirMcNeil’s award winning ThreeSix optical/geometric type system. Panopticon, Intersect, Nine and Interact are based on the application of regulatory conditions to generate geometric typefaces which function as the building blocks of page and screen architectures. The attributes of each type system, such as contours, set width, spacing and weight, are modulated consistently in calibrated steps, allowing the user precise control of typographic arrangements, spaces or sequences.

In addition, working with any MuirMcNeil type system in bitmap, vector or moving image software, the user is able to overlay selected component forms either in precise registration or in easily calculated positional offsets. Outlines, tints, colours, textures, patterns, transparencies or transitions can subsequently be applied as appropriate.

Panopticon: Named after a form of polygonal building devised in the eighteenth century by Jeremy Bentham to facilitate controlled and concealed viewpoints, Panopticon is a system of three-dimensional display typefaces in four orthographic projections. Each typeface projection is subdivided into four separate sub-component layers which are designed to interlock with one another precisely, offering a wide range of possible visual interactions. 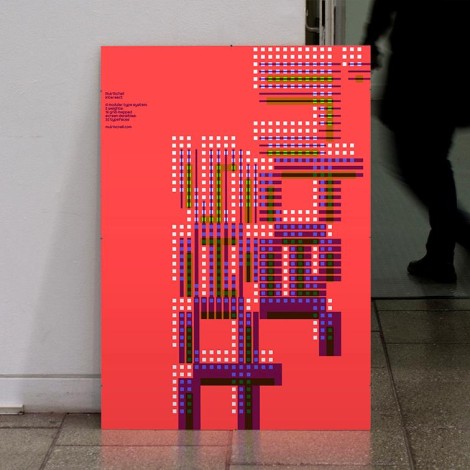 Intersect: Intersect is a geometric bitmap type system which aims to subvert the idea of typographic weight. Where traditional type designs can only provide a binary contrast of positive and negative, or form and counterform, Intersect exceeds this limitation by emulating a successive range of linear screens to give the illusion of tonal densities within the body of the letterform. The Intersect system is available in two alternative variants, analogous to light and bold, with each featuring sixteen screen patterns and tones mapped onto the same grid. Intersect typefaces can be assembled in multiple layers, providing thousands of possible visual permutations. Nine: Nine is a geometric type system available in both varispaced and monospaced versions – Nine Metric and Nine Mono. Although both Nine versions have been generated within strict geometric constraints they are sufficiently robust for use in either extended text settings or display. Both typefaces have nine weights whose strokes align on a central horizontal and vertical axis onto which weight is added incrementally. In this way, width, stroke, cap-height, x-height, ascent and descent are modulated vertically and horizontally on a fixed grid. The grid also determines consistent character and word spacing throughout. 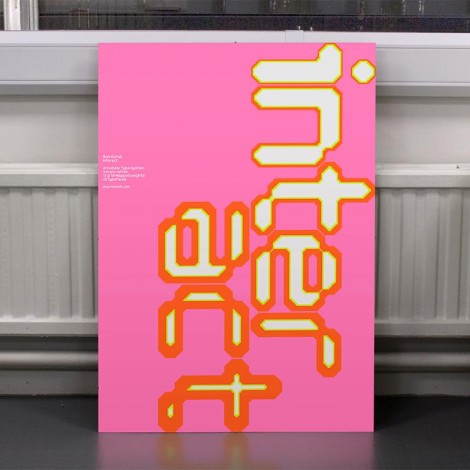 Interact: Interact was originally designed by 8vo in 1994 as a system of grid-based bitmap typefaces for screen use in four fixed sizes. Taking as a starting point the optical characteristics of the stroke junctions in Wim Crouwel’s ‘vormgevers’ lettering of 1968, Interact employs horizontal and vertical lines as well as forty-five degree pixel steps to modulate a set of stroke junctions which have the effect of optically rounding the letterforms. Interact has been extensively expanded and revised by MuirMcNeil as a system of 23 typefaces in 4 scaleable groups with a comprehensive range of 12 calibrated weights. Interact typefaces follow a mathematical progression in which type sizes are scaled in exact proportion to a constant pixel resolution.

MuirMcNeil’s website, www.muirmcneil.com, has been relaunched to support the release of the new projects, with extensive information on the team’s design background and development. Typeface licenses and posters are available for purchase at www.muirmcneil.com/shop. MuirMcNeil’s activities are focused on exploring parametric design systems to generate appropriate solutions to visual communication problems.

Paul McNeil is a typographic designer with over 30 years’ experience working in corporate brand communications and visual identity for the UK telecommunications, government, public and charity sectors. He is currently Course Leader, MA Contemporary Typographic Media at LCC. Hamish Muir was co-founder of the London-based graphic design studio 8vo (1985-2001), and co-editor of Octavo, International Journal of Typography (1986-92). He is co-founder and art director of Outcast Editions, an independent publisher of high quality digital books on contemporary architecture and design, and lead tutor on LCC’s BA (Hons) Graphic and Media Design course.