Michael Pavelka is MA Theatre Design‘s Course leader, and Designer of the critically acclaimed West End production of ‘Twelve Angry Men’, which topped Time Out’s best selling West End shows this week, and will now be extending its run at the Garrick Theatre. 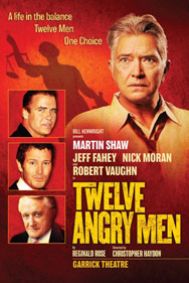 “It’s normally a bad sign when a review starts by mentioning the set but, bear with me, this one is different. How, after all, do you stage Reginald Rose’s 1950s jury-room legal drama, keep its surface realism and its condensed theatricality and make it all vital? A slowly revolving jury table, moving slower than the eye can detect on Michael Pavelka’s excellent set, isn’t the answer to all your problems, but it’s a hell of a start.”   The Times

Michael talks about the challenges of his design process creating set design for Twelve Angry Men  in an interview with The Birmingham Repertory Theatre.

Meanwhile, Michael’s productions of Propeller Theatre Company’s ‘A Midsummer Night’s Dream’ and ‘The Comedy of Errors’ continue to tour to major venues across the UK and Europe. Later this year these two contemporary interpretations of Shakespeare will play at the Théâtre National de Marseille, Istanbul Municipal Theatre, Craiova National Theatre in Romania.

Micheal Pavelka’s  ‘Pocket Henry V’, a shortened version of the full-scale production of Henry V, is now playing to young and festival audiences in the UK, and will be performed for six weeks at venues across Mexico.  Staggeringly, a quarter of a million people will have seen Michael’s live work this year.

Michael will be running a Theatre Design workshop at the Victoria and Albert Museum on May 3rd 2014. This V&A Special Event, entitled ‘Finding Ophelia’ is part of their programme of activities that mark the 450th anniversary of Shakespeare’s birth. Go here for more information on how to book a place.