MA Drawing students showcased their work at The National Gallery at a one off event ‘Just for the day’.

The show has been re-installed in the Foyer Gallery at Wimbledon College of Arts, running 3 April – 24 April 2014. 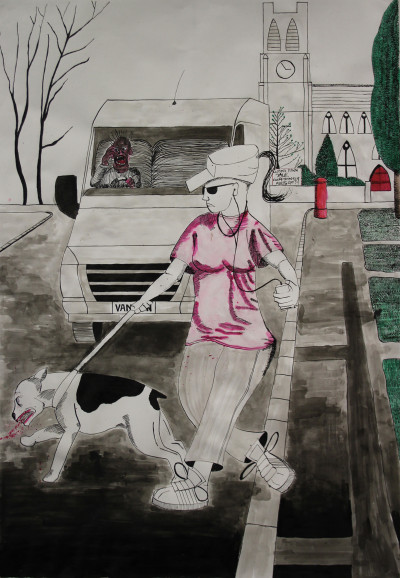 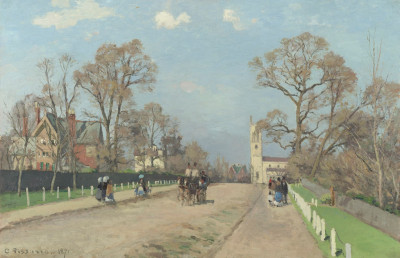 An intriguing feature of Camille Pissarro’s ‘The Avenue, Sydenham’, is his removal of a figure from the foreground of his Impressionist painting of suburban London made in 1871. I have considered who the missing person might be, why they disappeared and what the scene might look like if they were returned to the south London street today, 143 years later. In my drawing the dangerous dog drags Pissarrio’s absentee in front of a van racing down a rat run as the oblivious driver chats away on their mobile phone. Doomed, she crosses from life to death. . . 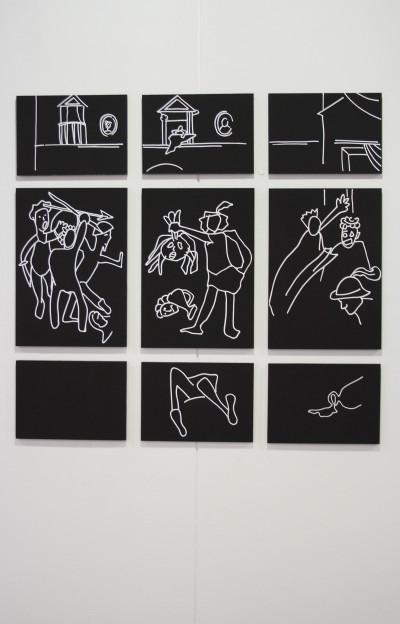 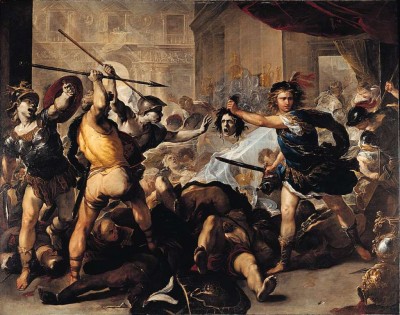 The painting ‘Perseus turning Phineas and his followers to stone’ by Luca Giordano, tells the story of Perseus and Andromeda’s wedding celebrations, which have been broken up by Pineas and his army. Phineas, a former suitor of Andromeda bursts in to attack his rival, however Peseus reveals the head of Medusa and turns them to stone.

I presented Giordano’s painting to a small group of children; discussing the story behind it and exploring in more detail the characters, background and overall impact of the painting.

‘Collaborative drawing’ is a digital print response put together from individual drawings by 10 different children. The children used permanent pen to create their own drawing as this eradicated the temptation for change or correction. The drawings were re-scaled and positioned to emulate Giordano’s painting narrative. Inverting the final composition accentuates the children’s powerful mark making whilst sectioning it into 9 panels offers further narrative possibilities. 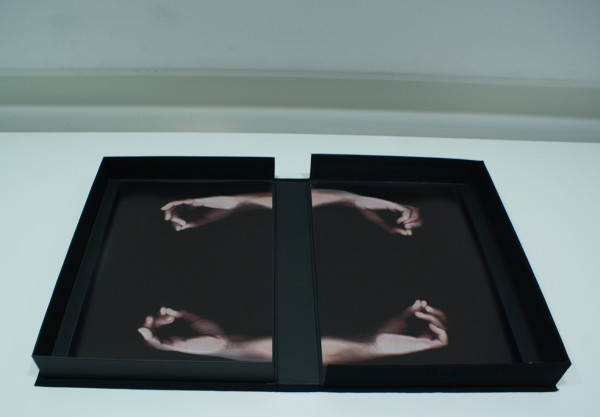 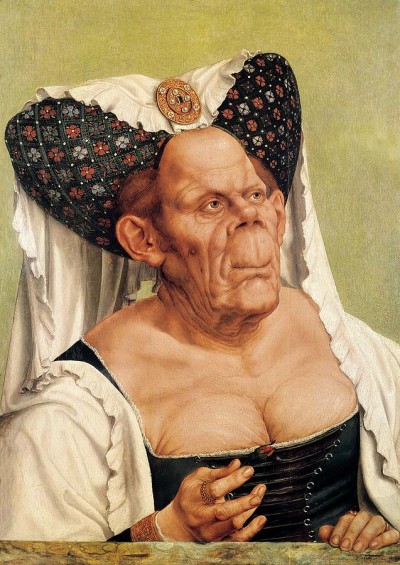 I was drawn to the beautifully exicuted tender mark making in oil on wood to replicate her tissue paper skin and each individual embroidery stitch in her hat. Her arthritic hands with bitten, dirty fingernails nails holding a tiny rosebud fascinated me.

The breadth of tricks and illusions employed by artists to direct the viewers eye around the painting surprised me, particularly in their use of hands.

My aim in ‘A Fine Line’ was to capture the delicacy of my ‘old’ hands performing an awkward deception. I imply that my image was captured by the familiar use of photography to replicate the quality of the oil painting by Massey, combined with the mood of such masters as Caravaggio or Vermeer.

My hands appear to be holding a taught ultra fine line of minuscule proportion, like a hair; in reality on closer inspection the line is an illusion. 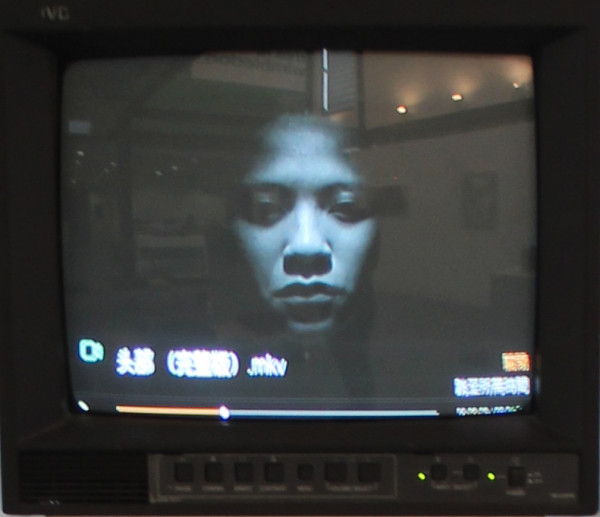 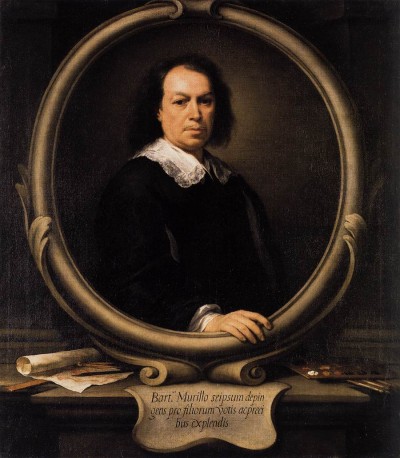 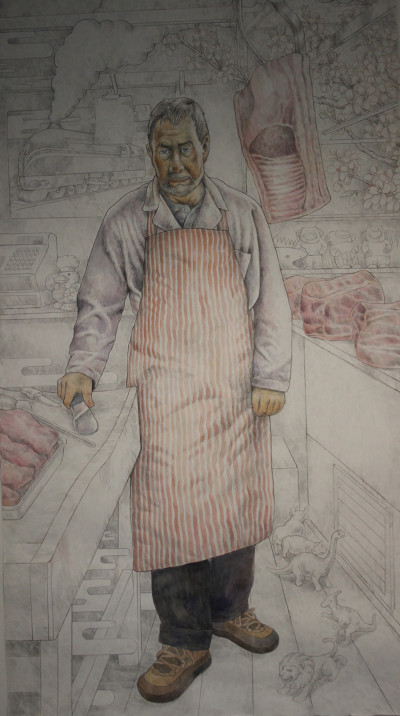 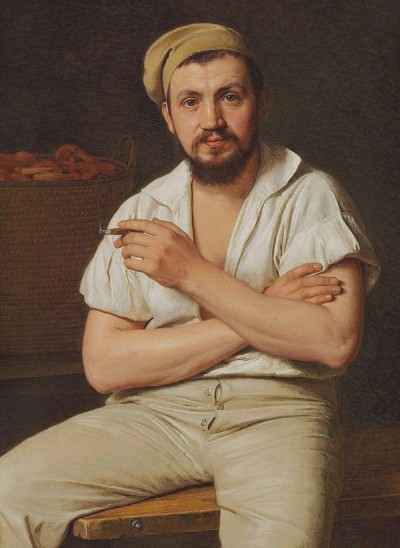 Jhih-Ren Shih chooses to feature The Butcher local to Wimbledon College of Arts to represent the everyday working man in response to Christen Kobke’s ‘Portrait of P. Ryder’ 1848 (The Baker).

See the entire exhibition of 20 works by MA Drawing students in response to The National Gallery collection, re-installed at Wimbledon College of Arts.

‘Just for a the day’

The post MA Drawing exhibition ‘Just for the day’ responds to The National Gallery collection appeared first on Wimbledon College of Arts Blog.