On the final day of London Fashion Week, Central Saint Martins alumnus Meadham Kirchhoff unveiled their A/W14 collection on the Topshop sponsored catwalk, in the grandiose Turbine Hall at Tate Modern. Stalwarts of the Fashion Week schedule, known for their flamboyant and playful aesthetic, Edward Meadham and Benjamin Kirchhoff brought a antidotal dose of kitsch fun to this industrial-feel space.

The duo met on the BA Fashion course at Central Saint Martins, where Benjamin studied menswear and Edward womenswear; after graduating in 2002 they launched the menswear label ‘Benjamin Kirchhoff’. This evolved into the internationally recognised brand Meadham Kirchhoff and the pair launched their first womenswear collection as part of the Fashion East – a showcase for emerging designers – in 2006. 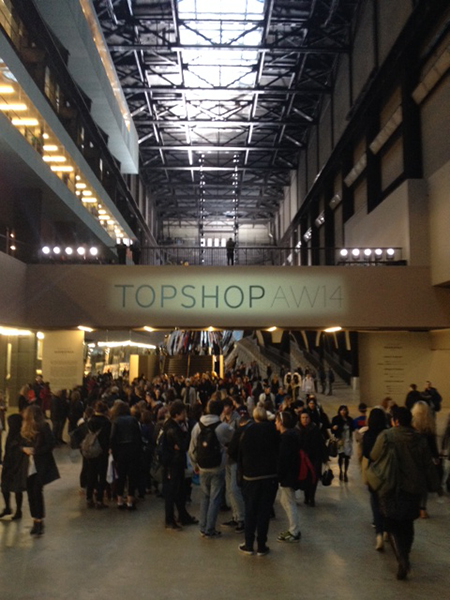 The designers have built a reputation for disregarding trend-led design, instead choosing to nurture and refine an aesthetic that is both rebellious and beautiful. This season’s collection stayed true to form. Under the bright lights of the Turbine Hall, and with a catwalk swamped in shimmery shiny props – from oversized love-hearts to Chinese screens – the designers presented a varied collection, referencing everything from the gothic, to seventies disco and the circus. Button-down dresses with big bow blouses and platform boots in metallic stripes brought a touch of the seventies to the collection, whilst heart-shaped tailoring and red chequers felt like we had fallen through the looking glass. Classic tailoring was reimagined in boldly bright twin sets and supersized purple tweed blazers with pink trim. 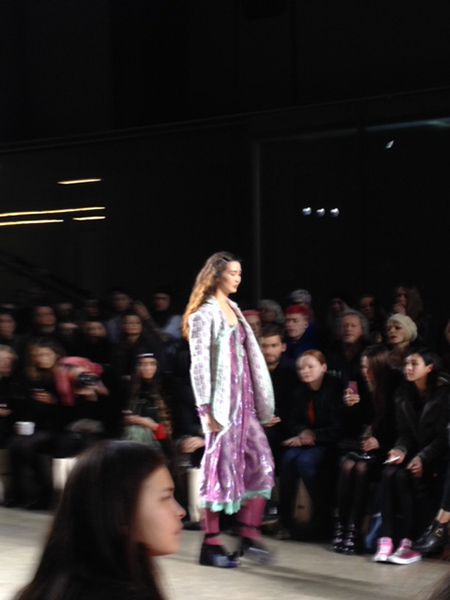 The pair’s trademark use of Victoriana-style lace and a fondness for costume was evident in the tulle layered dresses of mauve and dusty pink, paired with matching veils that conveyed an air of Miss Haversham. Midi-length dresses in candy box colours, paired with mannish cut jackets was a popular combination.

By using a range of models, from conventional catwalk types, to friends, stylists and popular London girls, Meadham Kirchhoff again demonstrated a belief in doing things their own way, a trait engrained in the ethos of CSM. Outsize jackets were worn by smaller models, as if to accentuate the variety of shapes and sizes and erode the notion of cloned walking mannequins.

Understanding their market and the need for commercial viability, the duo incorporated more accessible items without compromising their message. Accents of black, in jackets, and sheer lace dresses with nipped in waists, and iridescent purple and pink rain macs are likely to be popular pieces when the collection hits stores.

A Meadham Kirchhoff show is a fantastical experience, their creative touch channeled into everything from the props, to soundtrack, casting and clothes. This season did not disappoint, with an assortment of fictional references reinforcing the playfulness of fashion.