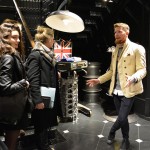 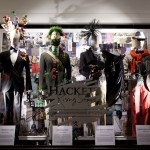 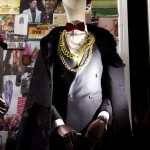 Seventeen students from LCF were given a unique opportunity to collaborate with British heritage brand Hackett, as part of their Rising Stars campaign. The campaign, which aimed to support young British talent, allowed students from the BA (Hons) Fashion Visual Merchandising and Branding and BA (Hons) Fashion Visual Merchandising and Branding (part time) courses to unleash their creativity by designing a new retail concept for eight store windows across London.

Hackett is renowned for its quirky and quintessentially British windows, and the brief asked students to be sympathetic to the heritage of the brand while still being innovative and experimental.

The seventeen LCF students styled seventeen mannequins with garments from the current S/S14 collection. Titled ‘Art College’, the collection was fitting for the students to work with. Props and accessories brought the window displays to life, set against the backdrop of the digital moodboard created by each student. The moodboards gave the students a chance to express their interpretation of the Hackett customer, alongside a humorous written explanation of their styling concept.

These fantastically visual window displays were hosted by stores in London’s main shopping districts, from Regent Street to Sloane Street and Covent Garden.

After the success of the project with LCF, Hackett aims to roll the Rising Stars concept out globally. Hackett has been partnering with art colleges across Europe, in cities such as Paris and Madrid.