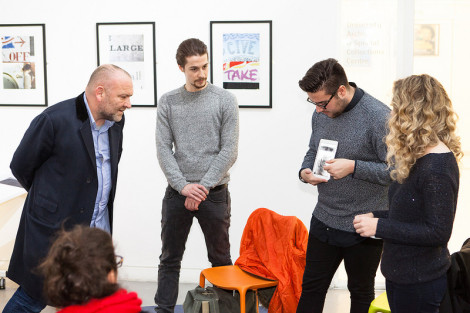 Designer and artist Scott King recently celebrated his new role as UAL Chair of Visual Communication by holding the first in a series of one-day project workshops for UAL students.

Scott King trained as a graphic designer, working as Art Director of i-D and Creative Director of Sleazenation magazines. He occasionally produces work under the banner CRASH! with writer and historian Matt Worley. His work has been exhibited extensively worldwide and clients have included such iconic figures as the Pet Shop Boys, Morrissey, Michael Clark and Malcolm McLaren.

The newly appointed UAL Chairs also include Nick Bell, LCC alumnus and Founder/Creative Director of Nick Bell Design, and Fred Deakin, Director of Fred & Company, a collaborative organisation specialising in interactive art projects. All three practitioners have been appointed as University-wide Chairs to give students the benefit of their industry expertise. 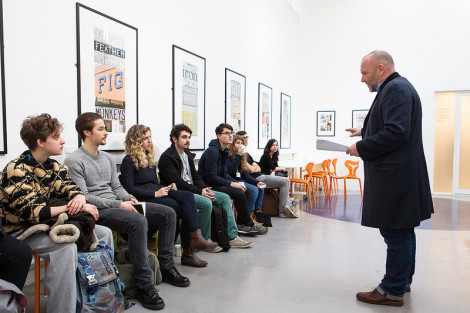 Scott’s first one-day project workshop, Slave to the Acronym, was held on Wednesday 22 January in London College of Communication’s Well Gallery and was attended by students from LCC’s School of Design. Starting from a choice of acronyms, students were asked to invent an organisation committed to a single cause. They then wrote a manifesto which served as their brief for the day, before doing everything they could to raise the profile of their organisation.

We asked Scott to tell us more:

How do you see your responsibilities as UAL Chair? What do you think makes working with UAL Chairs a unique opportunity for students?

I think it’s important that students become creatively ‘well-rounded’ and I see it as my responsibility to help them achieve this. To this end, I’ll be setting a series of projects across UAL that are really less about design than they are about quick thinking and immediate action. I’m hoping that the experience I have across many disciplines (from editorial design, to ‘fine art’, to writing etc) will be useful to the students. I think the days of being purely a graphic designer are perhaps numbered, and I’m very excited about working with students in what some people refer to as ‘the expanded field’.

What was your response to the students’ work during the recent workshop?

I was very pleased with the students’ work. The whole point of these one-day projects is to think/act quickly and attempt to communicate with an ‘audience’ outside of college. They all did this, so that was good. It’s very important that students understand that they cannot really fail in my projects… well, they can only fail by doing nothing at all.

What do you enjoy about working with the designers and artists of the future?

I’m very interested in us jointly attempting to expand the idea of what might constitute ‘design’ – and where that meets and crosses over with other aspects of popular culture.

What do you have planned for the remaining workshops being held here later in the year?

I want the workshops to become increasingly about the unexpected – I’m hesitant to say about ‘play’ – but I want them to be a break from the normal college day… a kind of day off, where they can experiment and try things that they might not normally do. The essence of these projects is to be brave… to throw yourself in and see what happens. 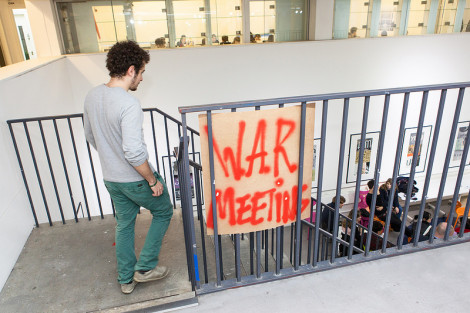 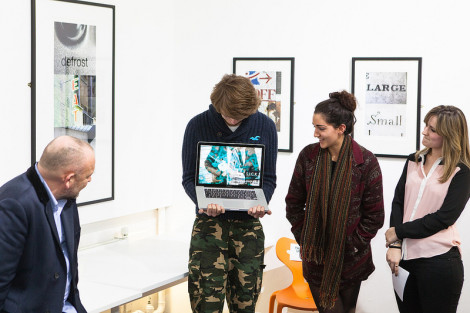 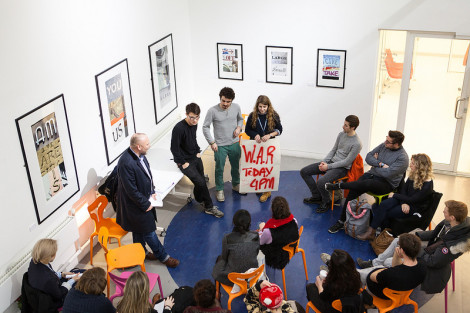 Read about London College of Communication’s School of Design.