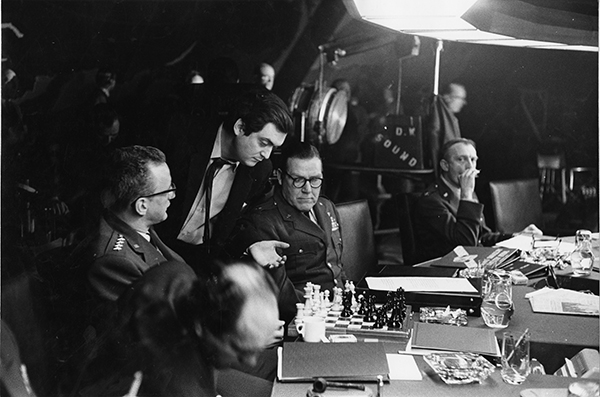 “One of the cleverest and most incisive satiric thrusts at the awkwardness and folly of the military that has ever been on the screen”. So ran the New York Times’ review of Stanley Kubrick’s comic masterwork Dr Strangelove, the day after its release in 1964.

Fifty years on, a recent Guardian feature placed the film as the sixth funniest ever made, and the BFI describes it as a “jet-black satirical masterpiece”. Premiered simultaneously in the UK and US on 29 January 1964, the film actually debuted two months after its slated release date of 22 November 1963, when President John F. Kennedy’s fatal shooting shook the nation. 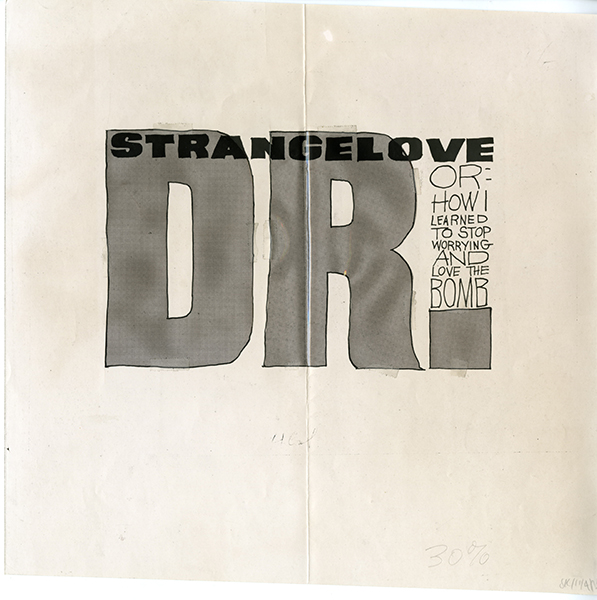 The Stanley Kubrick Archive, held at University of the Arts London’s Archives and Special Collections Centre, is one of the most unique cultural collections from the latter half of the 20th Century. The Archive’s extensive collection of objects relating to the creation of Dr Strangelove offers phenomenal insights into the development of the cult classic, with everything from draft scripts, photographs of alternative endings, personal correspondence and transcripts of the director’s conversations with co-writer Terry Southern, to captivating snapshots from behind the scenes and Kubrick’s infinitely detailed index cards noting every minute element of his planning. Within the Archives are the scripts and research, not only for the final film, but the little known two previous films Kubrick wrote based on the novel – the first a straight disaster film titled The Delicate Balance of Terror, then a heightened drama, before Kubrick hit upon the idea of devising a “nightmare comedy”. 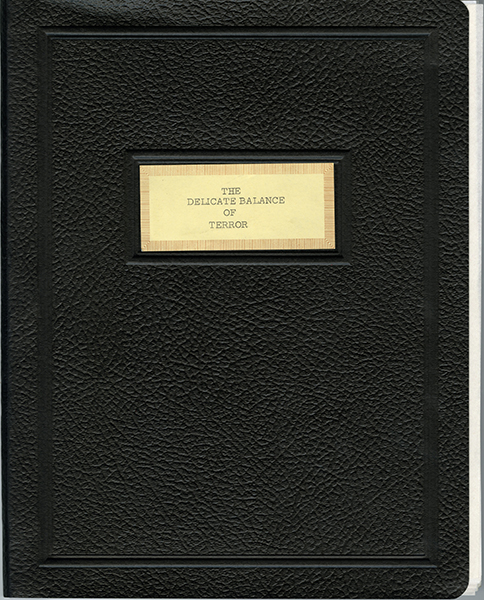 Reflecting on the film after 50 years, Kubrick’s longstanding executive producer Jan Harlan reveals the background to Kubrick’s evolution of the Strangelove story. Living in New York in 1964 Harlan joined Kubrick at press screenings where the director told him about his initial difficulties getting Dr Strangelove off the ground.

Harlan remembers: “He had been excited by the idea of making a film based on Peter George’s book Red Alert, a story about the nuclear arms race, but he found himself in a serious predicament, trying to tell such a heavy story about a potential nuclear disaster in the cinema, as entertainment. Why would anyone want to see this? How could he show convincingly that the arms race was absurd? He was an artist with a camera, not a military man or politician playing chess with the world. It was the absurdity itself that became the spark for a new idea: a black comedy – using humour to underline the seriousness of the game. He and Peter George wrote the screenplay with additional dialogue by Terry Southern. It became the blackest of comedies in the history of film.” 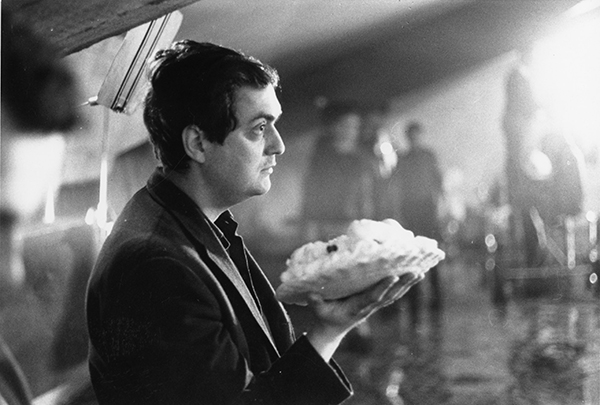 The film was controversial and extremely timely and Harlan recalls the sharply divided opinion that followed the film’s release: “It was a risky business and the conservative establishment – particularly the military – ‘was not amused’. One critic suggested that all the gold of the Soviet Union could not have bought more anti-American propaganda than Kubrick did with his film. But this was 50 years ago. The film was loved by millions, particularly in the US and has become an unrivaled icon to this day. When the first Iraq war broke out and we were sitting at lunch, glued to the TV set, I remember Stanley commenting: ‘I hope I haven’t made a documentary.’” Investigative journalist and Cold War expert Paul Lashmar corroborates the terrifying realism behind the satire: “When Dr Strangelove was released in 1964 some critics attacked it for turning the potential destruction of the world into a joke, others were angered at Stanley Kubrick’s portrayal of the America military leadership as a bunch of psychotics. At the time Stanley Kubrick made the film, in the early 1960s, the Cold War was at its peak and the running of the nuclear deterrent was opaque with secrecy and yet, I was to discover, he instinctively uncovered what was really going on.

“Kubrick decided that satire was the only way you could possibly get to the essence of the insanity of the Cold War. Thirty years later I produced a BBC Timewatch programme that investigated the Strategic Air Command in the early Cold War period. A massive nuclear air force, SAC with its slogan “Peace is our Profession” was at the heart of Dr Strangelove and its then leaders were believed to be the models for the mad nuclear generals of the film. In the post-Cold War world of the 1990s and since, I have been able to access information that had been top secret at the time of the release of Dr Strangelove and for the first time participants were prepared to talk candidly. I was stunned by how accurate Kubrick’s portrayal was. ‘How could Kubrick have known this?’ I repeatedly asked myself. Over the years my admiration for Kubrick and the film grows.” William Raban, LCC Professor of Film, picks up this contemporary perspective: “Dr Strangelove was made in 1964 at the height of the Cold War just two years after the Cuban Missile Crisis. The 50th anniversary of the film’s release coincides with the publication of a WIN/Gallup international survey finding 24% of respondents believing that America poses the greatest threat to world peace. Kubrick’s decision to spend most of his working life in the UK may partly be explained by his frustrations with the Hollywood studio system but equally perhaps it may have been a self-imposed exile from the febrile politics of America’s centrality in the Cold War. Half a century on, and Dr Strangelove has lost none of its potency. It is an eloquently crafted film with extraordinary performances by Peter Sellers and George C Scott. The closing scene: a visual symphony of mushroom clouds signifying an ensuing nuclear apocalypse to the ironic strains of Vera Lynn singing We’ll Meet Again feels chillingly pertinent to the present day.”

The Archives reveal Kubrick’s quest for realism that lies behind these convincing details; contained within the files is correspondence from Fred C Durant III, key adviser to US Military Intelligence offering Kubrick his services, alongside US Government publications on explosives, demolition and further technical source material. 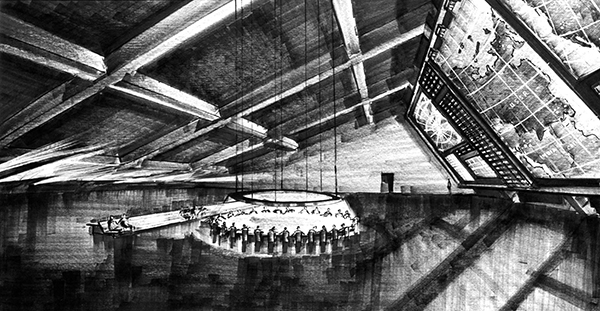 One of the most iconic elements of the film is its pitch perfect set design. Kubrick chose Ken Adam to create the meticulously imagined sets which form the unforgettable vision of each hyperrealistic scene.   Jane Collins, Professor of Theatre and Performance at Wimbledon, has worked with the Kubrick Archives in her research, drawing on the Archive’s collection of original Ken Adam sketches and Kubrick’s detailed notes on how each set should look. She comments: “Dr Strangelove is of particular interest to young designers because of the theatricality of its visualisation; it basically works around three sets, ‘staged’ or constructed environments designed by Ken Adam; Burpelson Air Base, the interior of the B52 Bomber and of course the famous War Room built at Shepperton studios. Christopher Frayling’s Ken Adam: The Art of Production Design notes that the War Room was described by Steven Spielberg as ‘the best set in the history of film’ and there is a story, possibly apocryphal, that the newly elected President Reagan asked to see it when he entered the White House.” UAL Kubrick Archivist Richard Daniels summarizes: “One of the things that I think is most interesting about Dr Strangelove is that it seems timeless. There were actually a number of films that dealt with the subject of the bomb that came out around the same time – including Fail Safe, The Day the Earth Caught Fire and Seven Days in May, and there are some fascinating items in the Archive relating to these, including Kubrick’s correspondence to Kirk Douglas on how he would have directed Seven Days in May and materials comparing the source novels for Fail Safe and Dr Strangelove – but Dr Strangelove is the only one from that period which you still see screened on regular occasion.”

Jan Harlan concludes: “With Dr Strangelove Stanley Kubrick established himself as one of the great American artists of his generation.” Kubrick vigilantly monitored the media response to his films and the Archive contains scores of boxes of neatly clipped cuttings for Dr Strangelove. While the newspapers of the day split out into the majority who recognized the film as an instant classic and those who reported “a crude combination of irony and comedy” [The Washington Post], “unblinking nihilism” [The Nation], or “a subtle piece of anti-American propaganda” [The Sunday Telegraph], perhaps few detected Kubrick’s own true horror and desperation at the sense of impending disaster which motivated the film. Kubrick’s biographer Vincent LoBrutto reveals that Kubrick was so concerned about the bomb that he even contemplated moving from New York to Australia to be out of range, a fact confirmed by Christiane Kubrick at the BFI’s recent panel debate.

Contained within the boxes are copies of the original promotion packs detailing the advice to promotions field reps, which explain: “Dr Strangelove is not only a brilliant piece of comedy entertainment, it is an intellectual experience the likes of which has seldom been seen on our motion picture screens. This fact, if advertised in the conventional manner, could be terribly misleading. In short, it is very difficult to tell people what Dr Strangelove is, for it is so many things.” Tellingly Peter Sellers’ interview with Motion Picture Daily on 21 January 1964 sees the actor explaining: “People here in England are always marching up and down saying ‘Ban the Bomb’ and that sort of thing. But this film, if viewed by the right people, could possibly do more good than all the marches altogether. Comedy is a serious method of doing things”.

Kubrick’s diligent filing ensured that the Archives contain every note and memorandum about the film’s release, including the hand typed lists of invitees for the London premiere, which runs not only the gamut of who was who in the arts in 1964 (from Benjamin Britten, Francis Bacon and the Beatles to Rudolf Nureyev, E.M. Forster and Vera Lynn) but compellingly the extensive list of political and military names invited to attend, from prime ministers Clement Attlee and Ted Heath to Harold Wilson, via Chief of Defense Staff  Earl Mountbatten, Chief of Air Staff Sir Thomas Pike and the Ministry of Defense’s Colonel Loham. Indeed one newspaper cutting in the Archive even suggests that JFK was given an advanced screening of the film just the week before his assassination. Looking back fifty years on, might the Strategic Air Command’s much satirized slogan ‘Peace is Our Profession’ be more aptly applied to Kubrick’s own mission with this film. 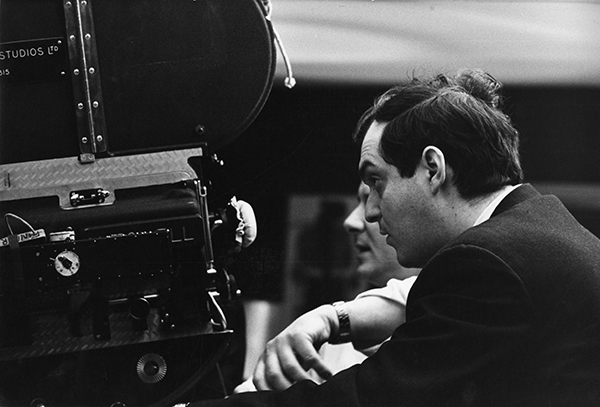 More information about the content of the Kubrick Archive at UAL is available in the online catalogue. A highlights exhibition, with more information about the archive, is also available on the Archives Hub website. The Archive is open to academic researchers, students and the public. Please contact the Archive to make an appointment to access the Kubrick Archive. Some access requests will require prior permission from the Archive’s donors. Find out more

Read more about Dr Strangelove and the Cold War context in an article by Paul Lashmar. 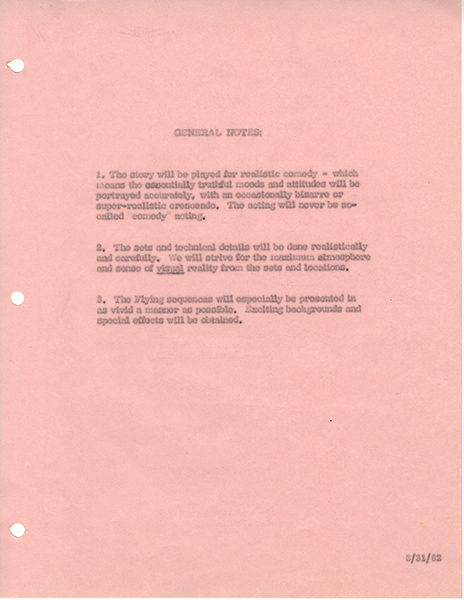 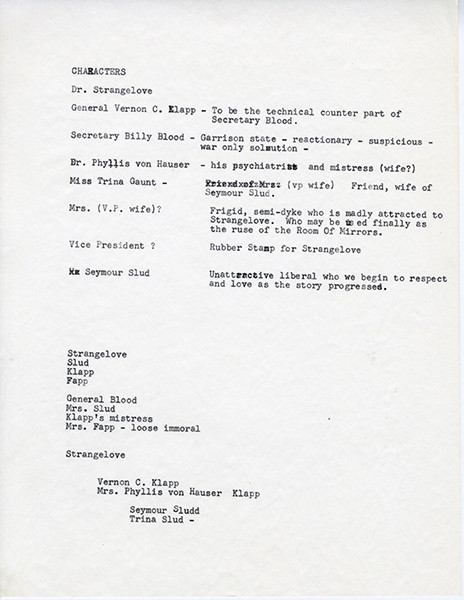 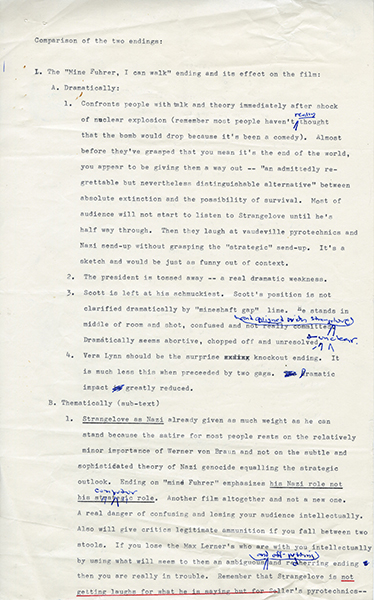 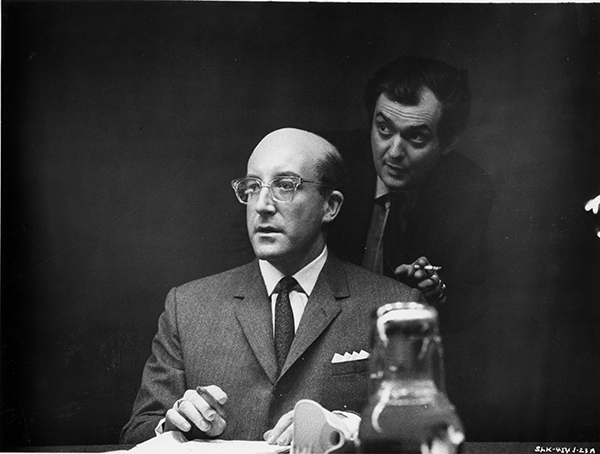 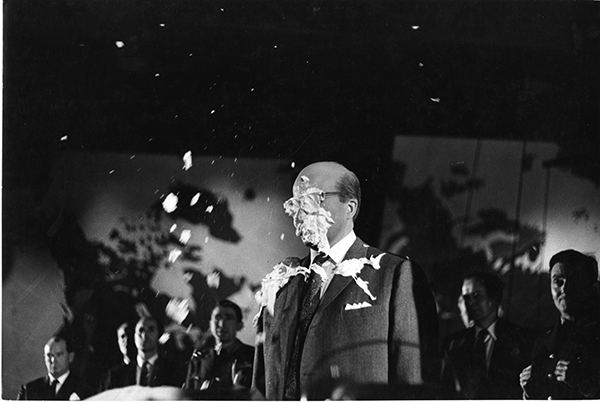 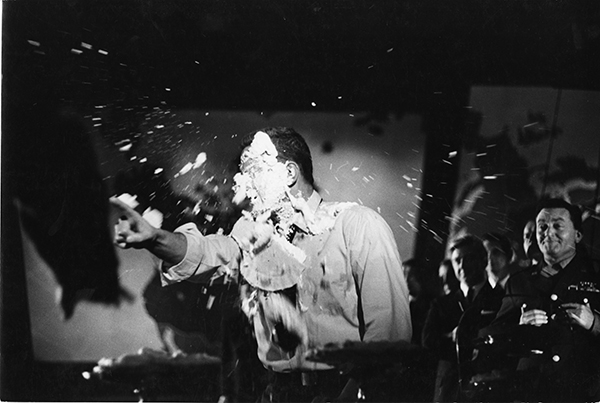 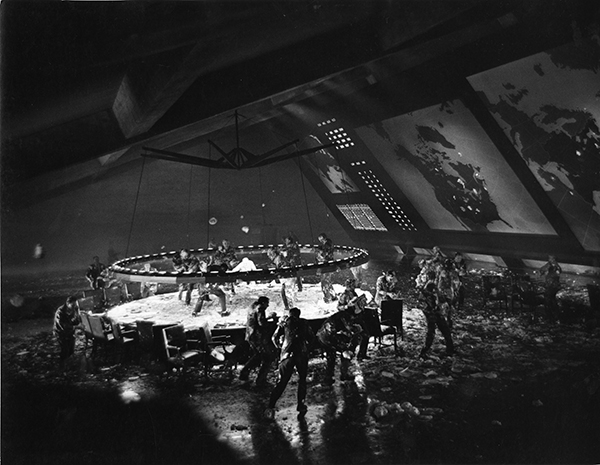