Paul Lashmar reveals the importance of the Cold Ward context to Dr Strangelove and reflects on the film’s insights 50 years later. 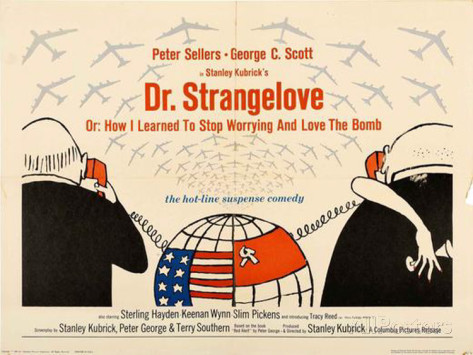 When Dr Strangelove was released in 1964 some critics attacked it for turning the potential destruction of the world into a joke, others were angered at Stanley Kubrick’s portrayal of the American military leadership as a bunch of psychotics. At the time Stanley Kubrick made the film, in the early 1960s, the Cold War was at its peak. The running of the nuclear deterrent was opaque with secrecy and yet, I was to discover, he instinctively uncovered what was really going on. Kubrick decided that satire was the only way you could possibly get to the essence of the insanity of the Cold War. Thirty years later I produced two BBC Timewatch programmes that investigated the Strategic Air Command (SAC) in the early Cold War period. A massive nuclear air force, SAC with its slogan “Peace is our Profession” was at the heart of Dr Strangelove and its then leaders were believed to be the models for the mad nuclear generals of the film. In the post-Cold War world of the 1990s and since, I have been able to access information that had been top secret at the time of the release of Dr Strangelove and for the first time participants were prepared to talk candidly. I was stunned by how accurate Kubrick’s portrayal was. “How could Kubrick have known this?” I repeatedly asked myself. Over the years my admiration for Kubrick and the film grows.

Who were the nuclear generals that Kubrick satirised? During the Second World War one prominent figure, General Curtis LeMay, who had efficiently orchestrated the firebombing of Tokyo and 62 other Japanese cities. He went on to build SAC into the largest nuclear force the world has ever seen. LeMay then joined the Joint Chiefs of Staff and to advise Kennedy – fortunately unsuccessfully – the launch an attack in response to the Cuban Missiles Crisis. General Thomas Power, LeMay’s deputy since the Japanese fire bombing, took over at SAC.

I discovered so much disturbing new evidence I wondered how the world had actually survived SAC and the Cold War. In the early 1950s there had been a wide ranging serious ‘below the radar’ discussion within the Pentagon as to whether there should be a ‘preventative war’ a pre-emptive nuclear first strike on the Soviet Union before the Russians had time to develop a nuclear arsenal. My research suggests that LeMay and Power tried to provoke the Russians into war at the time, apparently unknown to President Eisenhower. In response to the Dr Strangelove, the US Military robustly claimed that America’s deterrent was safe, yet many years later it turned out that it had been riddled by accidents and even the loss of nuclear weapons. The strange preoccupations of Kubrick’s crazed general Jack D. Ripper were reflected in the uber-masculinity of SAC. If, for decades, LeMay’s cigar-chomping, square jawed image epitomised the innate aggression of SAC, it was in some ways Power who was more disturbing. I interviewed senior deputies who admitted they thought Power was psychotic. This was the man who really had his finger on the nuclear trigger for many years. Kubrick managed to capture this world of destruction and insanity with mixture of accurate research and satire. I just wish he was around today to do the same for a mad, mad, world dominated by national security and consumerism.

Paul Lashmar is an investigative journalist and the Producer of ‘Baiting the Bear’ (on Gen LeMay) programme for the BBC2’s Timewatch (1996). He is now a lecturer at Brunel University. www.paullashmar.com

Search courses in journalism, film and scriptwriting at UAL

Find out more about the Stanley Kubrick Archive at UAL