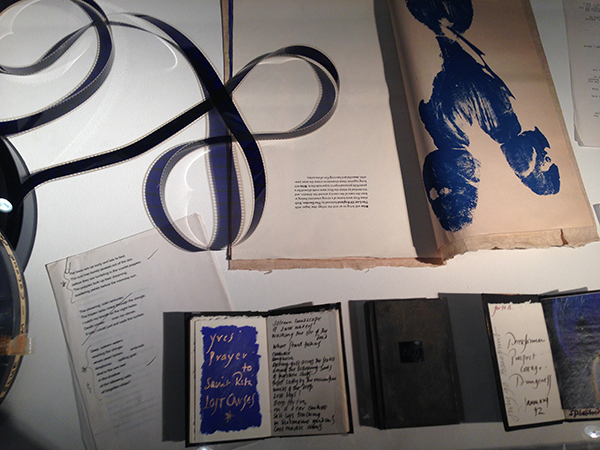 Clear cerulean skies of an early February afternoon, the Thames at high tide and tentative sunrays lighting up the interior of CHELSEA space in a glowing haze of ocean blue. A soundtrack of undulating waves pours through the gallery filled with page after page of flowing italic script in Derek Jarman’s distinctive hand surrounded by fields of thick indigo brushwork.

Barely a mile downriver a room high above the water at Tate Modern glows azure before a huddle of viewers watching Derek Jarman’s powerful late work Blue. The expanse surrounding Tate’s expanding cultural landmark is a short distance but light years from Jarman’s former homes in warehouse spaces further downstream in Butlers Wharf and Shad Thames. Then sprawling derelict areas of former industry, the warehouses provided not just shelter and studios but constant engagement with the light, reflections, history and change of the Thames itself which was such a source of inspiration for Jarman’s work.

Twenty years after his tragic early death, London is celebrating the legacy and mourning the disappearance of a creative whose loss is still felt. The season of activity includes the release of Thames and Hudson’s new publication Derek Jarman’s Sketchbooks and CHELSEA space’s exhibition Almost Bliss. 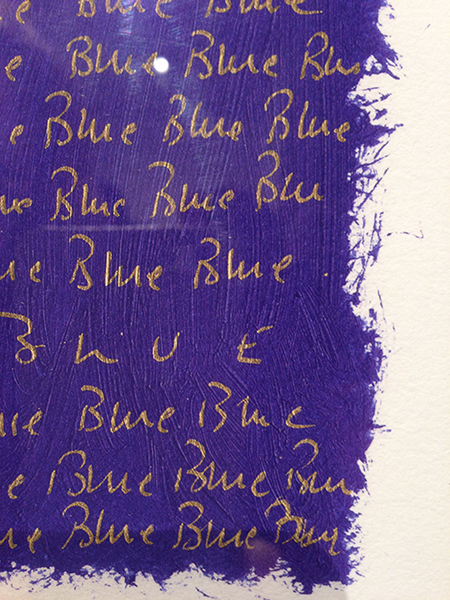 The title of CHELSEA space’s profound exhibition draws on the revelation that Derek Jarman’s late work Blue was originally conceived with the title Bliss. The film was only renamed towards the end of the production. The exhibition’s blue-lit installation centres on a set of Jarman’s hand painted and carefully written notebooks, giving insight into the artist’s creative thinking towards Blue. The dates of Almost Bliss encompass both the date of Jarman’s birth on 31 January 1942 and the date when he died, 19 February 1994.

In the installation three notebooks with hand painted gold covers are shown closed while facsimile pages of the notebooks line the walls. The exhibition includes prints, books, a canister of test cinefilm and other ephemera related to Jarman’s Yves Klein-inspired monochrome movie.

Donald Smith, Director of CHELSEA space, who curated the exhibition, reflects: “The artist, film maker, writer, and gay activist Derek Jarman was a brilliant man who exuded intelligence, fun, anger, and humanity in equal measure. Sadly and unbelievably it is 20 years since his tragic death from AIDS-related illness and the Almost Bliss installation at CHELSEA space offers a place to contemplate his work towards his late monochrome film Blue. The show revolves around Derek’s original notebooks for Blue which are contextualized in the important new Thames and Hudson publication Derek Jarman’s Sketchbooks. Other contributors to the show include Derek’s partner Keith Collins, artists Mark Wallinger and Peter Fillingham, and the Director of Tate Modern, Chris Dercon. Our show is in collaboration with Jarman2014 which is being co-ordinated at Kings College London and began with their exhibition, Pandemonium. It is great news that, as part of this year long series of events, the CHELSEA space show is complemented by screenings of Blue at Tate Modern.”

Thames and Hudson’s 2013 release Derek Jarman’s Sketchbooks, edited by UAL’s Rootstein Hopkins Chair of Drawing Stephen Farthing and Researcher Ed Webb-Ingall, traces the evolution of Jarman’s use of sketchbooks throughout his career, chronologically exploring their format, style, aesthetics and usage, to elucidate their beauty as artworks in themselves, their power as searing memoirs and their role in all of Jarman’s creative outpourings.

In her foreword to the book, Tilda Swinton, who worked with Jarman across a period of seven films in nine years, describes the sketchbooks as Jarman’s “moveable brainbox” calling them “part talisman, part private confessional, wholly unmediated raw dreamscape, reliable invisible friend and booster jet.. as close a thing to manifest evidence of the inner workings of his head as I can imagine.” Swinton recalls how the books would exist on set, seated on the director’s chair and constantly consulted as the cameras ran. She notes the importance of them for their materiality, their role as germinators for Jarman’s ideas and their constant presence throughout his life. 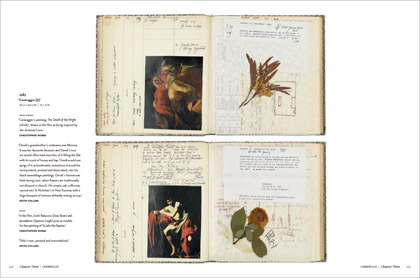 Revealing the history behind the publication, Stephen Farthing explains: “The story starts with two books that I edited that set out to reveal how sketchbooks, drawing books and journals are used by individuals involved in discovery. The first was about an architect – the sketchbooks of Nicholas Grimshaw – the second, a theatre designer – the sketchbooks of Jocelyn Herbert. With this experience in the background I was driven to the Kent Coast by CHELSEA space director, Donald Smith, to visit the once home of the artist, activist, gardener, film maker Derek Jarman, where I was shown a small sample of Jarman’s “sketchbooks”. Meticulously crafted, drawn, written, collaged, handmade volumes that told the story of a creative journey – it was immediately obvious that they would become the subject of my next book.”

He reflects: “Three years later after a lot of reading, looking, emails, meetings and negotiation, and work with my collaborator Ed Webb-Ingall we have a book, that is by chance published on the twentieth anniversary of Derek Jarman’s death.”

Asked what it was like to work on such a historic project Farthing responds as an artist: “It’s just like painting – the beginning and end are the best bits, the middle fairly messy.” 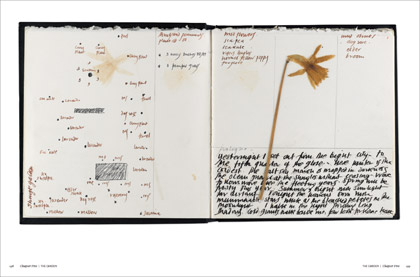 Throughout his life Jarman struggled with British art and film institutions, infuriated by what he perceived as a lack of courage and limited support for experimental artists. Farthing comments on Jarman’s contemporary status, saying: “Derek Jarman is, to my mind, the most important British twentieth century artist. Not “painter”, for me that’s Francis Bacon or Bridget Riley, not “sculptor”, that’s Henry Moore or Anthony Caro, not “draftsman” that’s David Hockney, not film maker, that’s Alfred Hitchcock… artist.”

He elaborates: “Jarman put himself in a place where categories driven by skill sets no longer matter. At a time when artists worked with images and writers worked with words he moved freely between words and image, at a time when the moving image had virtually no presence in fine art he blurred the distinction between the cinema and the gallery. At a time when by consensus modernism was the dominant aesthetic order, he messed with decadence, the Renaissance and Baroque. So to my mind he is the first British modern artist.”

Writing in Derek Jarman’s Sketchbooks, Jon Savage shares this vision, stating: “For Derek, everything was fused together in a kind of living Gesamptkunstwerk that included painting, stage design, published diaries, pop videos and his garden at Dungeness… The sketchbooks are an integral part of this total art work. Derek began as a painter and the beautiful drawings and annotations, in his instantly recognisable hand, show the process whereby colours, scenes and scripts were worked out, where two dimensions became three.” 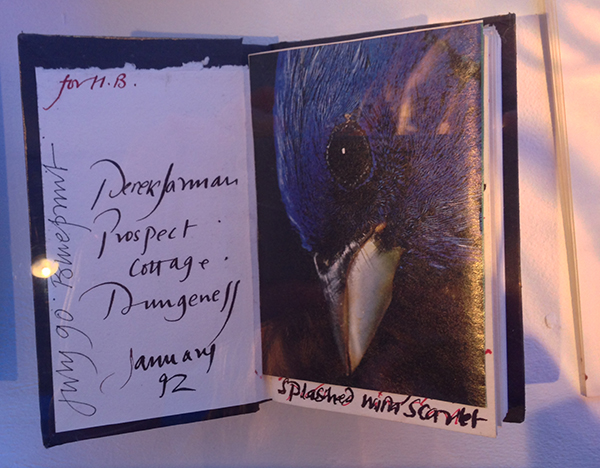 “One of the astonishing things about Derek Jarman is his refusal to stop being creative.” says Dominic Janes, UAL Chair of Cultural and Visual Studies, “He directed films, he painted artworks, he integrated his garden with sculptural forms, wrote poetry and produced a series of wonderful sketchbooks that are now finding an admiring public audience. And all of this was achieved in the face of deteriorating health and in the context of considerable political hostility and in the absence of any sustained programme of reliable funding. It is clear from my own explorations of queer visibility that his output was also of vital importance because it crossed boundaries between modernity and tradition in ways that mingled radical politics and aspects of pastoral patriotism. His queerness, therefore, was of a kind that did not simply speak to men who had sex with men, but to wide and expanding audiences who wanted to rethink the role played by beauty, however unconventional its forms, in bringing joy into our lives.” 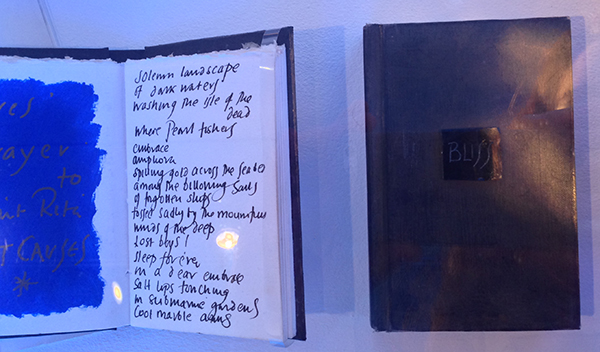 The unrelenting brilliance, energy and vision shining out in both the exhibition and publication bring to light once more that this was an artist with an insatiable urge to create. Writing in Derek Jarman’s Sketchbooks, Jarman’s partner and collaborator Keith Collins reveals: “On our last visit to the Venice Biennale to screen Blue we carried back a final consignment [of sketchbooks] from the tiny shop where they are made… one lone volume lies and touched at Prospect Cottage still waiting for Derek to fill its pages.”