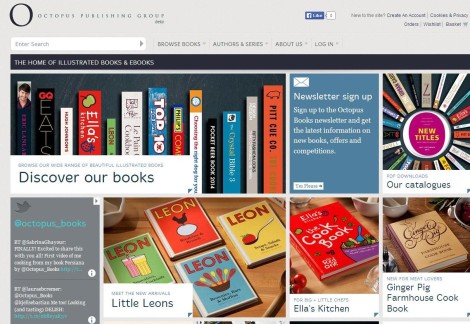 At the end of January students on London College of Communication’s MA Publishing course welcomed Andrew Welham, deputy CEO of the Octopus Publishing Group. Octopus are famous for their beautiful illustrated books and are a subsidiary of the giant Hachette publishing and media corporation. MA Publishing student Nikoleta Naydenova reports.

The publishing expert talked about the perks of the business, giving a detailed view inside Hachette, one of Europe’s biggest media companies, and encouraging the students with some professional advice on how to start a career in this field.

Andrew opened with a brief description of the four biggest book publishers operating in the UK, giving an insight into the marketing and business strategies of each. He explained the cultural differences between small independent publishers and the big corporations, and why in his words, “You don’t have to be big to make money in publishing”.

A key way that smaller publishers can succeed, according to Andrew, is by “trying to come up with something really clever, which potentially has the chance to make as much money as the big guys do”.

Students were also given the chance to look into Hachette’s organisational structure, both worldwide and within the UK. The guest lecturer gave some insights into the different UK operating companies which, he explained, each have autonomy.

He also gave a spark of hope for the print medium, saying that turnover for Octopus books grew in 2013. As Octopus publishes beautiful illustrated books on subjects such as cookery, the visual arts and crafts, their main revenue comes from print media. Nevertheless, Andrew’s position on the future of print was quite different. While he acknowledged that print would always play a strong part in illustrated books, he advised students that it was still important to go digital and learn how to operate across digital platforms.

Andrew was very eager to share his know-how with the class of potential publishers and took the opportunity as a lecturer to give a few tips to kick-start their careers.

“Get in there, whatever you need to do to get into publishing – do it,” was one of his first pieces of advice. Sharing his early experience as a marketing and sales assistant, he also reminded the students that initially they have to be prepared to work at everything within companies, “especially the small ones”. He was clear about what potential employers like in a candidate: “Don’t oversell yourself, don’t use clichés and always do a bit of homework on the company”.

This fantastic lecture certainly had all the students thinking and revisiting their CVs for the next work experience placement or job opportunity.

The post Deputy CEO of Octopus Publishing Group tells students how to kick-start their careers appeared first on London College of Communication.