Great news for Camberwell College of Arts BA Drawing Lecturer, Jordan McKenzie, who has a new show opening at Yorkshire Sculpture Park on 1 March 2014. It was a commission by Yorkshire Sculpture Park and funded by the Arts Council of England. The exhibition consists of two new films made with a group of young performers from Yorkshire. The films are called Car An(t)dre and LeWitt Lean.

Accompanying the film Carl An(t)dre is LeWitt Lean (2013), a new work made on-site at YSP. Employing Sol LeWitt’s 123454321, McKenzie invited performers to lean on the sculpture in groups that mimic the mathematical principles that inform the sculpture’s construction.”

To accompany the exhibition there will be a major catalogue published of Jordan’s work spanning over fifteen years of artistic practice. The catalogue includes a critical essay by Doctor Klara Kemp-Welch, Lecturer in 20th Century Art, Courtauld Institute of Art and an introduction by Doctor Helen Pheby, Head of Curating at Yorkshire Sculpture Park.

More information about the exhibition can be found on Yorkshire Sculpture Park’s website. 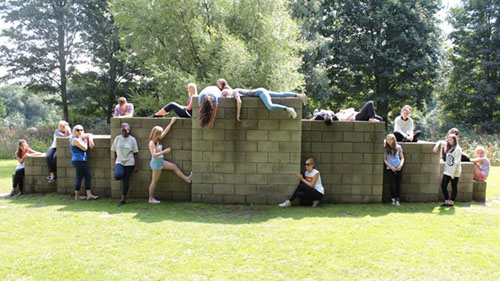