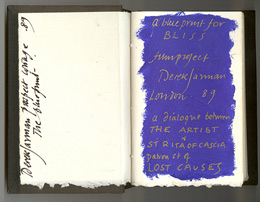 We are very excited about  the upcoming show, Derek Jarman ‘Almost Bliss’ opening at Chelsea Space next week.

Almost Bliss commemorates the 20th anniversary of the death of artist, filmmaker, writer, and activist Derek Jarman. This blue-lit installation centres on a group of Jarman’s hand painted and carefully written notebooks, giving a visual insight into the artist’s creative thinking towards what was to become his seminal late film work, Blue.

The exhibition makes reference to two earlier installations inspired by Jarman: one by Mark Wallinger in 1994 and another by Peter Fillingham with Keith Collins in 1999. The show will also include prints, books, a canister of cinefilm and other ephemera relating to Derek Jarman’s Yves Klein-inspired monochrome movie. 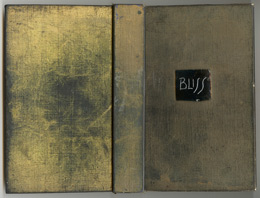 There is also a great opportunity to see Derek Jarman’s Blue in full as it is currently screening at the Tate Modern until 6 April 2014.

As well as the show we will be hosting an exciting event at Chelsea relating directly to the work of Derek Jarman.  Chelsea will be hosting a day of talks, performances and screenings.  Working with specialists, friends and fellow artists the day will examine the space produced by Jarman’s work, whether it be through works on paper, painting and film, or his connection and influence on choreography and performance. Speakers include Philip Hoare, James Mackay, Christopher Hauke, Peter Fillingham, Jo Melvin and a panel discussion chaired by Donald Smith with Stephen Farthing, Ed Webb-Ingall and friends and colleagues of Derek Jarman. The one off event includes a screening of films by Derek Jarman and Joachim Koester and a performance by Patrick Staff.  The event will take place in the  Banqueting Hall at Chelsea on Friday the 14th February 11am-5pm and you can book a place online.  For more information on the event and our postgraduate courses please have a look at the following article posted by the Guardian.